Theatre Review: ‘The Legend of Georgia McBride’ at Round House Theatre 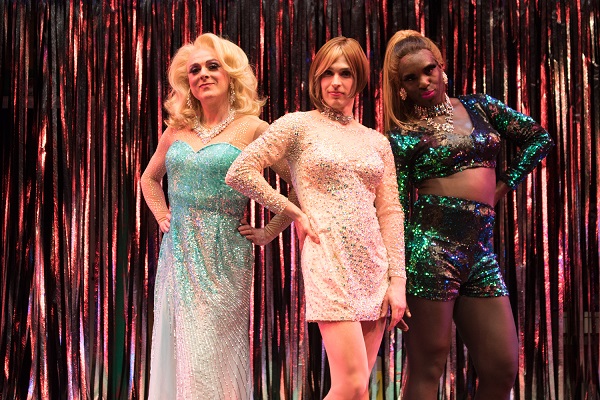 Rick Hammerly, Zack Powell, and Dezi Bing in “The Legend of Georgia McBride” at Round House Theatre. Photo by Kaley Etzkorn

Round House Theatre is currently offering the regional premiere of “The Legend of Georgia McBride” by playwright Matthew Lopez, which I attended on Monday, June 11, 2018. Featuring a small cast of five performers, “Georgia McBride” tells the tale of a would-be Elvis impersonator who finds himself demoted to bartender and then promoted (and transformed) to drag queen when his small town bar brings in some new talent in a bid to bring in more patrons and revenue.

I recommend “The Legend of Georgia McBride” as a wonderfully entertaining production that will delight you.

In all honesty, “Georgia McBride” is more like a dash of play added to an extended drag show but that’s not necessarily a bad thing, especially when most of the numbers are outstanding! Within the storyline of a straight man hiding his newfound love for drag from his wife, there are a few powerful moments that pop out here and there in the sometimes thin script to deliver an unexpected gut punch.

Drag queen Rexy, played with brilliance by Dezi Bing, has the privilege of delivering the most intense lines of the evening when she explains the meaning behind drag to the naïve and straight Casey, played by Zack Powell. Bing brought down the house with a raw and emotional monologue that gave me shivers. She also stole every scene that Rexy was in all night long, whether she was throwing shade, falling down drunk, strutting onstage in yet another amazing costume, or performing “Girls.” A true testimony to Bing’s versatility as a performer is that she also plays straight neighbor Jason.

The play had a lot of humor and much of the comedy came from the very talented Rick Hammerly playing Miss Tracy Mills, the mentor queen determined to make a star out of Casey and turn Cleo’s bar into a profitable business. Hammerly was exquisite in each drag number, with outrageous facial expressions and dramatic dance moves and in fact, Hammerly and choreographer Matthew Gardiner are the reasons why “Georgia McBride” works so well. The choreography throughout the evening to the different musical numbers was phenomenal and Hammerly had the audience in stitches as they performed it.

Bar owner Eddie, played by Charlie Kevin, despite having a small role consisting mostly of walk-on introductions to the numbers, managed to command the audience with his tiny bits, dissolving us into giggles. Yesenia Iglesias plays Casey’s wife Jo with earnestness and I enjoyed her hormonal breakdown (while her character is very pregnant) when she sees Casey in drag for the first time.

I did enjoy many aspects of Powell’s performance as Casey/Georgia. As Casey, he hits the right notes in his interactions with the other characters. He also has a beautiful singing voice and even plays the guitar in one number. As Georgia, Powell does very well with the facial expressions, especially the flirtatious winks. But to me, he still read too masculine at times in his hips and shoulders when performing. However, Powell brought a lot of energy to the show and to all of his numbers.

The sets designed by Scenic Designer Misha Kachman were perfect and brought me right into a small backstage dressing room in a beach bar and a cheap rented apartment for Casey and Jo’s home. The costumes by Costume Designer Frank Labovitz were fabulous and will enthrall you! I especially enjoyed the subtle touch of Eddie’s emcee outfits becoming more and more glamorous as his bar became more and more successful.

Overall, I recommend “The Legend of Georgia McBride” as a wonderfully entertaining production that will delight you.

Running Time: 110 minutes with no intermission.

“The Legend of Georgia McBride” at Round House Theatre plays through July 1, 2018. For more information, click here.