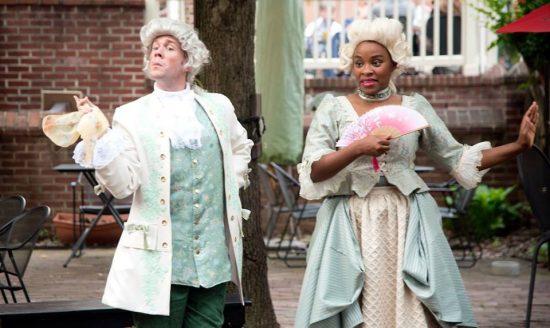 Each year, Annapolis Shakespeare Company produces a show in the outdoor courtyard of Reynolds Tavern. This year’s production is the very fun and very funny, “The Miser” (directed by Sally Boyett) written by Moliere. Now that Maryland weather has finally started to feel like summer, I can’t imagine a better evening on the town than watching a very talented cast (including a few familiar faces to those that frequent ASC) recreate 17th century France under the stars.

…they have succeeded in creating a bawdy and fun romp, wonderfully acted by a team of talented comedic actors. What’s not to like about that?

The story follows Harpagon, the miser in the title, who is so preoccupied with the amount of money he has stashed away, he’s unwittingly found himself in the middle of multiple love affairs within his household. His children and his servants all hate him and he is pretty awful, so they seize the opportunity to finally get what they want from the old man – love, freedom and maybe just a few gold coins. Originally a play with 5 Acts, this streamed down version of the comedy works perfectly in this pub setting. The story is easy to follow and the dialogue is quick and breezy, as are the creative costume changes.

Aside from Dexter Hamlett – playing the miser himself with blustering annoyance and Bethany Mayo – playing the lovely and in love Elise, the miser’s daughter, every other actor portrays at least one additional character. Sometimes – as in Nate Ruleaux’s case – an actor plays 4 different characters; often within the same scene. Each of Ruleaux’s characters – whether it is the scheming servant or the long-lost man from afar – is distinctive, while keeping his physicality and humor intact. Because the character changes are often so fast and furious, a sound or music is played to denote that the man you are seeing on stage, is now playing someone else. This brilliant decision to telegraph these quick changes helps the audience to easily follow the story but it’s also a very funny note. It doesn’t hurt that the music – whether a bit of a pre-recorded song or Ruleaux honking a horn – is all very ridiculous, in the most wonderful way. Each time an actor reacts to these notes in character, the audience seems to enjoy it more and more.

Another standout in the cast is Ian Charles playing the fabulously over the top son of Harbagon. His Cleante is boisterous and money-hungry and is also a bit of a fashion fiend. From the top of his big, blonde powdered wig, to the tip of his gold-heeled shoes, he is the perfect essence of 17th century aristocracy – even though, he’s currently living on borrowed gold.  This costume, as well as the rest of the cast’s intricate coattails and dresses (all designed by Sandra Spence), are a highlight of this production. Because there is no actual set, the beautiful details on the costumes,  ground the show in 1600s France. Not to mention, the outfits are just beautiful to see.

With every show I see at ASC, I’m floored by the costume designs. Each outfit on the stage is always beautifully realized and fits perfectly into whatever world the actors are inhabiting at that moment. The wrong costume can tell the wrong story, but the designers at ASC manage to tell the right story each and every show.

The ASC has designed an evening that’s perfectly enjoyed with a cocktail and friends.  They’ve brought the same care and consideration to this small-scale production of “The Miser” as they have to the rest of the shows in their season. And they have succeeded in creating a bawdy and fun romp, wonderfully acted by a team of talented comedic actors. What’s not to like about that?