Theatre Review: ‘The Nance’ at Little Theatre of Alexandria 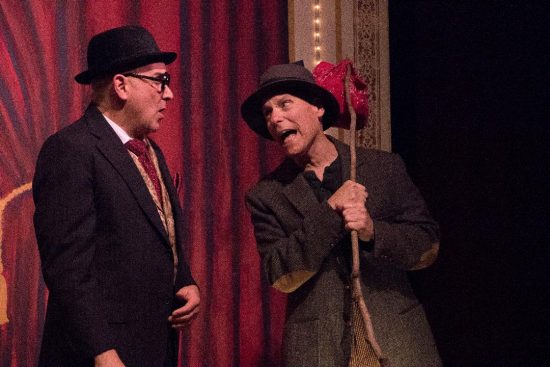 Chuck Dluhy (Chauncey Miles) and Jack B. Stein (Efram) in ‘The Nance.’ Photos by Matt Liptak.

What was in the water in the 1930s America??? Extra gin from the speakeasys? Awash in booze and a returning economy, excited by technological breakthroughs, artistic triumphs, and an era of, ahem, human exploration, this powder keg of clashing sensibilities comes to a head at the popular burlesque show at the Irving Theatre in New York. Eerily similar to the conditions in prewar Germany in “Cabaret,” this latest offering from Little Theatre of Alexandria, “The Nance” works from the inside out, examining the sticky situation of one Chauncey Miles, who plays the title character. The “nance” in burlesque is an exaggerated effeminate sketch player. Usually played by a straight man, in Douglas Carter Beane’s well-crafted story, he is a closeted gay man balancing two worlds. On Broadway, its limited 2013 run was headlined by Nathan Lane, and one can imagine Lane channeling his inner Birdcage for the part.

The role here is in fine hands with local stage vet Chuck Dluhy. He imbues Chauncey with an immediate thread of vitality, serving up endless expressions and pouts, and creating a complex portrait of both a gay man and determined performer. The balance of character, schtick, dance and overall pathos make it the role of a lifetime and he delivers.

We first meet Chauncey in a downtown automat, a dapper older man trolling for companionship under the watch of the 1930s Mayor LaGuardia morality squad. He eyes Ned (John Paul Odie), a down on his luck young man and smiles slyly as he glances over to the adjoining table, clutching his copy of Variety. They surreptitiously rendezvous and to Chauncey’s surprise, Ned wants to make things more than a one-night stand. Ned’s growing attachment to Chauncey and the upcoming issues with the burlesque fuel the personal conflict. Interestingly, Chauncey’s strong Republican leanings lead him to dismiss LaGuardia’s threats against burlesque joints as election time grandstanding, and he refuses to change or tone down his nance act. Odie’s Ned is a challenging role, needing to exhibit growth and change over the show, and not be overpowered by Chauncey’s power of spirit. In both areas, he shines, and adds a little cheekiness.

The enjoyable driving force of the show is the many burlesque skits that we are regaled with, replete with innuendo and glances. The dancers make ends meet in convivial ways with the customers and when Chauncey is approached by one onstage, he states: “Let me give you some money so you can have a good time on your own. Because you wouldn’t have a good time on me.” (Add requisite eye roll).

The balance of character, schtick, dance and overall pathos make it the role of a lifetime and he delivers.

And on it goes. Stage sidekick and troupe manager Efram takes on the many ‘setup’ roles of the burlesque. Played with a marvelous versatility by Jack B. Stein, he adds a Durante-like style and fine mugging. Not to be missed, we are treated to the classic Niagara Falls skit, a burlesque staple made famous by Abbott and Costello.

Soon the theater gets a reputation for being quite gay-friendly in the balcony as well as onstage. “Degenerate dastardly conduct — or what we call ‘Tuesday’ in New York” Chauncey quips. As his personal and professional life get complicated and crash together, there is a duality about Chauncey–he needs to both celebrate and denigrate his status as a gay man, many decades before the drag queens and trans women’s acceptance of today. Dhuly’s funny but bittersweet portrait of a bygone era contains just enough warning about the guardians of “morality” who are always waiting to pounce to make “The Nance” timely as well as nostalgic.

Odie as Ned shows us the blossoming joy in a man who finally finds, in the theater and with Chauncey, a place to truly be himself. When he finally calls out the central flaw in Chauncey’s closed-off approach to life. “You’re always waiting for someone else to decide,” he says. With this self-reliance, Chauncey also depends on chance and the kindness of strangers to keep his double lives afloat. Chauncey is bitter at the end, sitting at the automat again, hoping for that ethereal happiness that he can’t fully obtain personally or professionally.

Director Frank D. Shutts II has paced scenes with the same intensity as the sketches they live in. The show works on many levels, causing guffaws, a shock or two, some heartbreak, and even a smattering of social commentary, as Chauncey (Reps and Dems were decidedly different then) felt that LaGuardia’s harassment of the burlesque business was only for show and would stop, since “Republicans don’t like when people aren’t working.” Replicating the original production, this show creates the effective carousel set with 4 rotating scenes, a design show in itself. Dan Remmers’ design and construction by Tom Reilly have created a fine rotating calliope of fun.

Stefan Sittig’s choreography was limited on the small stage, but focused on accentuating the talents and dimensions of our 3 burlesquesttes. Our trio of dancers, all interestingly of varied body types, are Charlene Sloan, the brassy and buxom card-carrying Communist, Janice Rivera, who recreates her Carmen Miranda act, and Danielle Comer the sultry Chantelle. Some costume choices were questionable, (Sarah Gale and Sarah Holt) but if the dancers were doing multiple quick changes 2 times a day, hey it works.

Opening nite was an anticipated event, made even more memorable by the failure of the computerized light board. However, by the use of house lights and spots, the cast did not miss a beat, and in doing so embodied the show must go on spirit of burlesque. Don’t miss this seldom-performed gem.