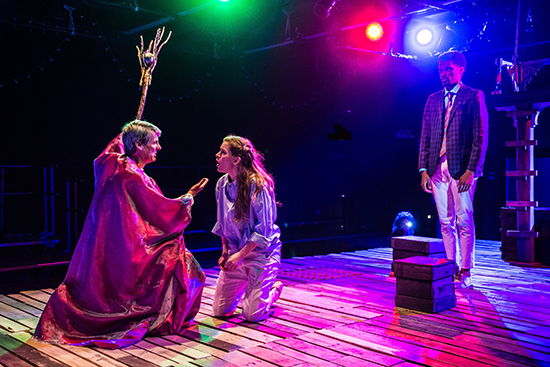 A story that begins with a shipwreck might not seem like sunny, summer fare, but Avant Bard’s exciting new production of William Shakespeare’s “The Tempest,” directed by Tom Prewitt, is a luminous staging of the bard’s magical tale.

The story’s opening shipwreck leaves a band of travelers from Milan stranded on a strange island. The island, however, is not deserted, but populated by Prospero (Christopher Henley), the exiled Duke of Milan. Having mastered magical powers, it is he who has caused the tempest that wrecks the ship, part of a plan to trap the enemies onboard who plotted his overthrow. He shares the island with his daughter, Miranda (Allyson Boate), as well as a motley crew of spirits, including his sprightly helper, Ariel (Emily H. Gilson, Camille Pivetta, Reginald Richard) and angry Caliban (Justin J. Bell), a half-human magical creature that Prospero mistrusts and mistreats. The wreck’s survivors wander ashore, including Ferdinand (Miles Folley), and Antonia (Cam Magee), Prospero’s traitorous sister.

Christopher Henley gives an electric performance as Prospero. The character commands respect as he works his sorcery, sometimes with a glint of possible madness in his eyes, but nonetheless tethered by his affection for Miranda. The two have a natural, easy rapport that anchors the story. Allyson Boate shows herself a generous performer as Miranda, equally convincing as the dutiful daughter to Prospero, and the lover of Ferdinand, a passionate and sincere Miles Folley.

…a luminous staging of the bard’s magical tale.

The design team helps to underscore the light tempo of this production. The under-the-sea blue and green color palette of Ariel’s costumes fluoresces under the jewel-toned lights. Andrew Bellware’s soundtrack features a set of sea-shanty tunes that create a relaxed, island-style feel, further represented by the floral prints and shorts that Miranda and Ferdinand wear (costumes courtesy of Greg Stevens). An impromptu wedding celebration feels almost carnivalesque.

The production’s spirits are one of the highlights of the show. The choice to embody Ariel, Prospero’s magical assisant, in three actors makes their scenes dynamic. The three Ariels, outfitted in mermaid-punk attire, flit around like birds, in stark contrast to Justin J. Bell’s gruff, growling Caliban. Creeping out from under the stage, often crawling on all fours, Bell’s performance is both broad and nuanced. He makes full use of Greg Stevens’ impressive wooden thrust stage, stomping, tumbling and climbing, conveying the magical creature’s rage while creating real empathy for his subjugation to Prospero.

Cam Magee and Alyssa Sanders are a special treat in the gender-swapped roles of Stephano and Trinculo, a pair of drunkards that wash ashore, but never quite dry out thanks to a consistent supply of booze. Outfitted like 1940’s-style comedians, their antics exploring this ‘new world’ with Caliban provided many of the show’s laughs.

“How beauteous mankind is,” exclaims Miranda upon finally meeting the rest of Ferdinand’s comrades. Her wonder epitomizes what is an essentially optimistic production, which focuses on heartfelt reunions and reconciliations before its conclusion. It’s essential viewing for those in need of a braver, kinder, world.

Running Time: About 2 hours with one intermission.