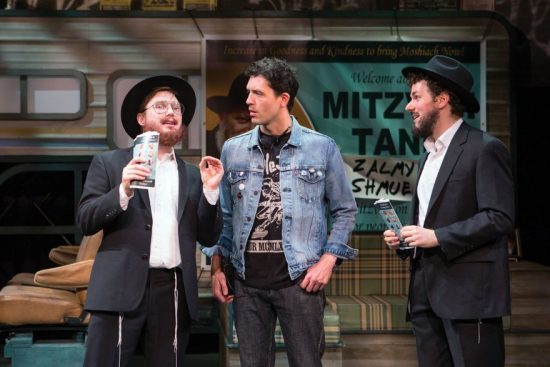 Josh Adams as Shmuel, Drew Kopas as Jonathan, and Tyler Herman as Zalmy in ‘Trayf’ at Theater J in Washington, D.C.  Photo by Teresa Wood.

Funny, affecting, and thought-provoking, “Trayf” tells the story of two young Chabad-Lubavitcher Jewish men, one committed to the orthodox lifestyle, the other, drawn to a life in mainstream society.

Best friends since childhood, Shmuel (Josh Adams) and Zalmy (Tyler Herman) hit the streets of Brooklyn in a “Mitzvah Tank” (a “mitzvah” is a good deed), the rebbe’s loyal soldiers battling for the souls of secular Jews while enthusiastically debating—in true 1990s fashion, the merits of listening to an album in its entirety versus “mixed” tapes.

Director Derek Goldman has assembled a superb cast, each of whom embodies their respective characters with ease, authenticity, and grace.

Unbeknownst to Shmuel, Zalmy is slowly being drawn into the wider world, sneaking out to discos, roller skating, and listening to rock and roll music.  When Jonathan (Drew Kopas), a young, hip music producer approaches the mitzvah tank wanting to learn more about Judaism, Zalmy agrees to introduce him to the religion. As Jonathan begins to embrace the ritual, community, and close family ties of Orthodox Judaism, he also inadvertently serves as Zalmy’s doorway to the secular world.

Zalmy wrestles with the knowledge that leaving the community also means leaving his loved ones behind. At the same time, Jonathan develops a blind loyalty to his new religion, much to his Jewish girlfriend Leah’s (Madeline Joey Rose) dismay, who in the end, decides to leave him behind.  Shmuel struggles with the potential loss of his best friend to a world and a way of thinking that they had always agreed was “trayf” (forbidden).

Director Derek Goldman has assembled a superb cast, each of whom embodies their respective characters with ease, authenticity, and grace.  Gifted with comedic timing, Adams and Herman provide heartfelt moments that frequently give way to side-splitting humor. Rose portrays the sharp, no-nonsense Leah with the perfect blend of sensitivity and outrage, and Jonathan beautifully captures the fervor of a zealous convert convinced his new religion really does have all the answers.

Paige Hathaway’s (scenic design) innovative use of the space includes a larger-than-life poster of the rebbe plastered to the mitzvah tank, a constant reminder of the culture that dominates the characters’ lives.  Kelsey Hunt (costume design) and Gregory Bazemore (hair and beard design) make essential contributions to the production’s authenticity and believability.

Playwright Lindsey Joelle explores themes that extend beyond a singular religious ideology.  She has given audiences a story about friendship, growing up, and growing apart.  About making choices that disappoint the people we love because personal integrity demands it.  Most especially, about coming to terms with what we really believe and who we really are, no matter the cost.