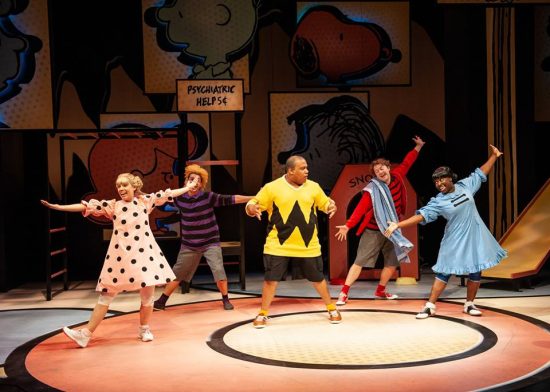 For fans of the Charles Schulz’s classic Peanuts cartoons and comics, Imagination Stage’s production of “You’re a Good Man, Charlie Brown,” directed by Aaron Posner, is sure to bring a wave of childlike glee. The show, which was shortened slightly in order to keep the attention of the children in the audience, was energetic, colorful, and full of laughs for the whole family.

For those unfamiliar with the show, it is a series of small, slice-of-life scenes, songs, and moments, just like the comic strips: for instance, Linus tries to get Snoopy to play fetch, Charlie Brown confesses a secret to Lucy, who laughs in his face, and Sally is “mad at the world” because her jump rope has become tangled. The punchlines of these simple-yet-comical interactions sometimes come at you rather quickly, but the ones that land are sure to induce uproarious laughter in kids and adults alike!

A few notable cuts included “Snoopy,” the iconic beagle’s first of two solos, Sally’s coat hanger monologue, and the “Queen Lucy” sequence, but the vignette-style book allows these changes to go all but undetected, even to those familiar with the show.

Watching this classic musical in a crowd of children somehow breathes new life into it. Each interaction felt more real and honest than it had in any other production I’ve seen, like things children would really say and do rather than a set of insincere caricatures.

The production starred Christopher Michael Richardson as Charlie Brown, an awkward young boy who often worries about fitting in with his peers; one of the first scenes in the show sees him agonizing over whether or not his crush notices him. Richardson plays this part excellently, giving the character new life with his delightfully quirky mannerisms and stunning voice. Michael J. Mainwaring played Schroeder, a budding pianist who idolizes Beethoven, and whose solo, “Beethoven Day,” was one of the show’s most exuberant moments. Awa Sal Secka’s portrayal as Lucy, Charlie’s friend who often criticizes him, made it clear that she was both a vocal and comedic powerhouse; her two solos supplied some of the funniest jokes in the show. Harrison Smith was wonderful as the charmingly precocious Linus, walking the line between the sort of kid who can’t leave his blanket alone on the ground for even a moment and the sort of kid who writes about the “sociological implications” of “Peter Rabbit.” Erin Weaver portrayed Sally, Charlie’s bratty younger sister, perfectly channeling the mannerisms of a kid her age, all while showing off her impressive belt in “My New Philosophy.” Finally, Joe Mallon seemed to be a crowd favorite as Charlie’s beagle, Snoopy, providing a bit of deadpan humor for the parents.

It’s worth noting that this show at times feels a bit “over-acted,” which can be tiring for the adults in the audience. But don’t forget that Imagination Stage’s target demographic is young children, and exaggerated movements and vocals can help them to better understand the jokes. I promise, after just a few short scenes, it’s hardly noticeable.

On stage alongside the actors was music director and pianist Deborah Jacobson, who was decked out in a Peanuts-esque wig and costume so as to blend in with the scenery. She was the show’s only accompaniment (besides the cast, who occasionally provided supplementary percussion, slide whistle, etc.), but the sound was as full and rich as that of a full orchestra, especially with the piano on stage.

Aside from Jacobson’s piano, the set, designed by Nate Sinnott, was sparse but effective, comprised of Snoopy’s doghouse, a jungle gym, and a slide, as well as a bright backdrop featuring cutouts of each character as seen in the comics. Choreography by Tony Thomas was delightful, effectively keeping the children in the audience engaged with the action on stage.

Watching this classic musical in a crowd of children somehow breathes new life into it. Each interaction felt more real and honest than it had in any other production I’ve seen, like things children would really say and do rather than a set of insincere caricatures. And “Happiness,” the show’s well-known closing number, sounded almost like a parable, each line speaking a lesson to the kids in the audience: “happiness is tying your shoe,” “happiness is sharing a sandwich,” “happiness is anyone and anything at all that’s loved by you.”

Advisory: Recommended for ages five and up.

Imagination Stage’s “You’re a Good Man, Charlie Brown” plays through August 12th, weekdays at 10:30 am and weekends at 1:30 pm and 4:00 pm. Imagination Stage is located at 4908 Auburn Avenue, Bethesda, MD. For tickets and information, click here.