“If you’re anything like me, you’ve probably seen ‘Hairspray’ a half-dozen times already, and are not entirely convinced the show can still surprise you. Let me assuage your fears; the Tantallon Community Players’s production breathes new life into this classic tale.” – Johanna Alonso.

Synopsis: It’s 1962 in Baltimore, Maryland, and quirky, plus-sized, teenage Tracy Turnblad has one dream: to dance on The Corny Collins Show. When she gets put in detention with the African-American students in the school, they teach her some of their dance moves, and her new found groove wins her a spot on Corny’s show. Overnight, Tracy transforms from a nobody into a star, and uses her newfound influence to advocate for racial integration on the television show. Tracy faces scrutiny and bullying from the network producer, Velma, and her popular, but vicious, daughter, Amber. With the help of the teenage heartthrob Link, host Corny Collins, and Motormouth Maybelle (the host of ‘Negro Day’), Tracy overcomes the odds and succeeds in her mission to integrate The Corny Collins Show. Tony Award-winning Hairspray continues to be one of the most widely produced musicals today, not only because of its wit and charm, but also because of the beautiful message of acceptance and progress that it portrays. The bright, energetic story of Tracy Turnblad teaches us all to look past the color of one’s skin and fight for every human being’s equal rights. 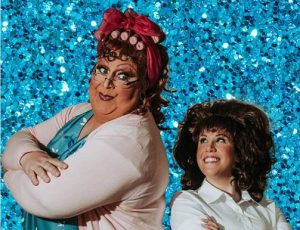 Synopsis: Winner of the 1966 Pulitzer Prize for Drama and a Tony Award winner, this powerful, beautiful play is filled with humor and compassion and touched with poetry. A wealthy middle-aged couple has their complacency shattered when longtime friends appear at their doorstep claiming an encroaching, nameless “fear” has forced them from their own home. Their arrival sets off a firestorm of doubt, recrimination and ultimately solace, upsetting the “delicate balance.” 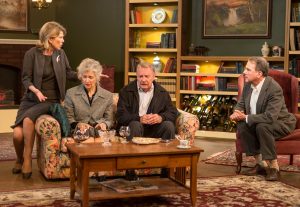 3. ‘The Scottsboro Boys’ at Signature Theatre.

“It is thought-provoking, timely, and brilliantly executed. This is a show worth seeing more than once.” – Mary Ann Johnson.

Synopsis: On March 25, 1931, nine young African-American teenagers were ripped off a train, falsely accused of a crime, hastily tried and sentenced to death in an outrageous disregard of due process. With a sound and style reflecting the period and exhilarating dance and song, The Scottsboro Boys transforms an event that gripped the nation into a compelling musical nominated for twelve Tony Awards®. 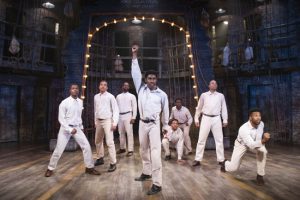 “‘Smokey Joe’s Café‘ is a fun, bright evening that should be savored with abandon – head thrown back, hands in the air, butt wiggling in the seat and a big grin at the sheer enjoyment of it.” – Timoth David Copney.

Synopsis: Leiber and Stoller, as much as anyone, virtually invented rock ‘n’ roll, and now their songs provide the basis for electrifying entertainment that illuminates a golden age of American culture. In an idealized setting, the classic themes of love…won, lost and imagined, blend with hilarious numbers and slice-of-life emotions. Featuring nearly 40 of the greatest songs ever recorded, SMOKEY JOE’S CAFE isn’t just great pop music – it’s compelling musical theatre. 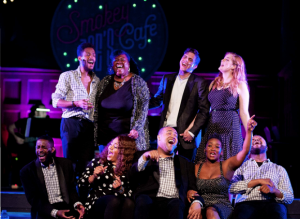 Synopsis: Charm City Ballet (CCB) presents the premiere of its original full-length ballet, “The Little Mermaid.” CCB has received critical acclaim for many of their past performances, so join them as they bring this magical story to the stage. 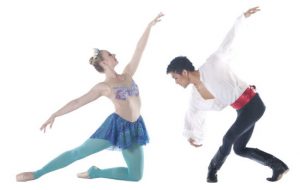 The cast of The Little Mermaid. Picture courtesy of Charm City Ballet.