1. ‘Dancing in My Cockroach Killers’ at Gala Hispanic Theatre.

“…the cast, in a swirling, fervent recitation/celebration of Puerto Ricans and their culture, deliver a knock-out of a show.” – Mary Ann Johnson. 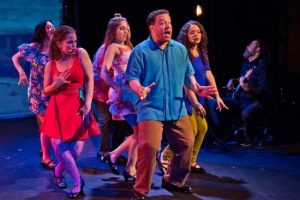 “This performance is unlike anything this reviewer has seen in this area in over a year of reviews – it is unique and immensely enjoyable.” – Kristin Franco.

Synopsis: The Old Time Music Hall returns this June, featuring glamorous dancers, a melodious chorus, sensational soloists, and lots of comedy, kept in line by Mr. Chairman, Malcolm Edwards, with our very own Cheeky Chappie, Albert Coia. Celebrate the 100th anniversary of the ending of WW1 with British, American and French songs! 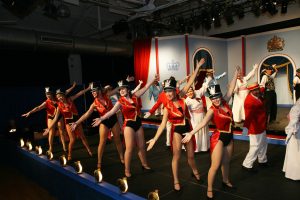 3. ‘The Bridges of Madison County’ by Damascus Theatre Company at Gaithersburg Arts Barn.

“Damascus Theatre’s production of “The Bridges of Madison County” is a passionate and accomplished piece of theatre.” – Kristin Franco.

Synopsis: In partnership with Damascus Theatre Company. This romantic musical centers on a brief, four-day love affair between a National Geographic photographer and an Italian-American housewife in 1965 Iowa. Based on the novel by Robert James Waller and presented through special arrangement with Music Theatre International (MTI). 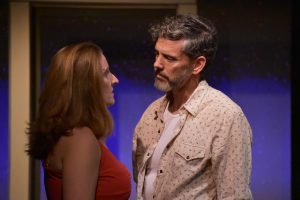 Francesca (Elisabeth Hester) and Robert (Chad Wheeler) at the precipice of a decision that will change both their lives, in Damascus Theatre Company’s production of “The Bridges of Madison County,” now playing at the Gaithersburg Arts Barn.

4. ‘Hamilton’ at The Kennedy Center.

Synopsis: As Broadway’s award-winning Hamilton: An American Musical comes to the Kennedy Center, it’s as if the DC metro area is welcoming home one of the nation’s founding fathers. Museums are dusting off their historic Hamilton artifacts, 18th-century fashion sense is reappearing on stages and exhibit spaces and all that formidable cursive – by way of letters, records and signatures – is causing confusion in the digital age. 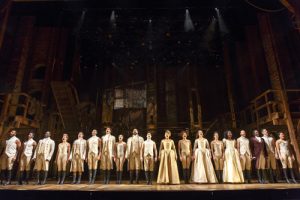 5. ‘The Miser’ by Annapolis Shakespeare Company at Reynolds Tavern.

“…they have succeeded in creating a bawdy and fun romp, wonderfully acted by a team of talented comedic actors. What’s not to like about that?” – Kristen Price.

Synopsis: The plot concerns the classic conflict of love and money. The miser Harpagon wishes his daughter Elise to marry a wealthy old man, Anselme, who will accept her without a dowry, but she loves the penniless Valère. Harpagon himself has set his eye on young, impoverished Mariane, whom his son Cléante also loves. Much of the play’s action focuses on Harpagon’s stinginess. Valère and Mariane are revealed to be Anselme’s long-lost children, and they are happily paired with the miser’s son and daughter by the play’s end, after Harpagon insists that Anselme pay for both weddings. 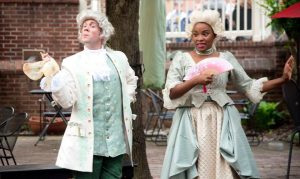