1.  “The Elaborate Entrance of Chad Deity” at Cohesion Theatre.

“…Cohesion Theatre and MACE’s character shows what’s underneath all of the lights, videos and sounds – an intelligent story with heart.” – April Forrer.

Synopsis: The Elaborate Entrance of Chad Deity by Kristoffer Diaz is a rollicking romp through the nature of sports as performance and the heart of American identity. Directed by Daniel Douek, the play features professional-wrestling style stunts, costumes, and of course, kayfabe. The play was a finalist for 2010 Pulitzer Prize in Drama. The New York Times said ““Chad Deity” is punch drunk on the adrenaline, verbal as well as physical, it brings to presenting an illusion-based sport as the true American pastime.” 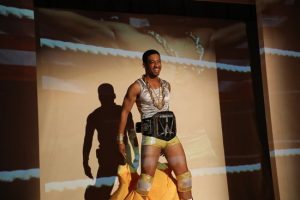 “Director Derek Goldman has assembled a superb cast, each of whom embodies their respective characters with ease, authenticity, and grace. ” – Jeannette Mulherin.

Synopsis: Zalmy lives a double life: by day, he’s the rebbe’s loyal foot soldier, driving a tricked-out “Mitzvah Tank” through NYC with his best friend Shmuel. By night, he sneaks away from his Orthodox community to roller-skate, dance in discos, and listen to rock and roll. But when he befriends a zealous young man eager to be his student, the barrier between Zalmy’s two worlds starts to crack—until he must choose once and for all where he belongs. Overflowing with humor and heart, you won’t want to miss this delightful new play. 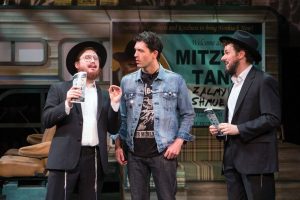 3. “The Tempest” by Avant Bard at Gunston Arts Center.

“…a luminous staging of the bard’s magical tale.” – Norah Dick.

Synopsis: “The Tempest” opens in the midst of a storm, as a ship containing the king of Naples and his party struggles to stay afloat. On land, Prospero and his daughter, Miranda, watch the storm envelop the ship. Prospero has created the storm with magic, and he explains that his enemies are on board the ship. 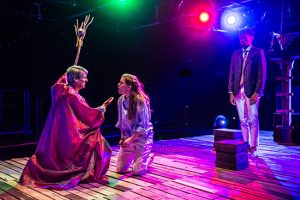 “This is a gentle, and ultimately hopeful, play considering that death permeates it.” – Mary Ann Johnson.

Synopsis: This world premiere production invites audiences into a world of healing, compassion, and renewal. While visiting his family’s secluded cottage on the shores of the Atlantic ocean, Owen, a typically urban fifteen-year-old boy, and his fisherman father clash until an unlikely and healing communion with an injured whale awakens in Owen a forgotten boyhood and connection with the sea. 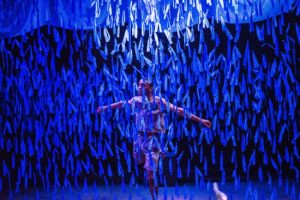 Nate Shelton in Swimming with Whales at 1st Stage. The show runs through June 24, 2018, in Tysons Corner. Photo by DJ Corey.

5. “Botticelli in the Fire” at Woolly Mammoth.

“…a celebratory mix of the sacred and profane that is sure to please.” – Norah Dick.

Synopsis: Sandro Botticelli is devoted to beauty, sensuality, and pleasure. While painting The Birth of Venus, however, the limits of his dedication are put to the test by the arrival of a conservative priest leading a populist revolution in Lorenzo de’ Medici’s Florence. When his full-throttle, decadent ways catch up to him, will the famed artist sacrifice his work… or the life of his young apprentice, Leonardo Da Vinci? 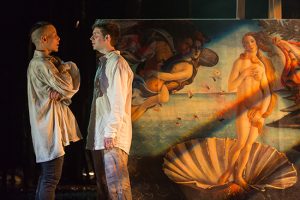