Concert Review: ‘Harry Potter and the Prisoner of Azkaban’ with the National Symphony Orchestra at Wolf Trap 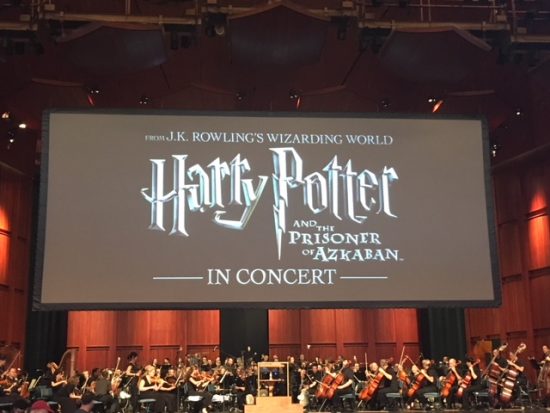 The National Symphony Orchestra accompanies the hit film “Harry Potter and the Prisoner of Azkaban,” at Wolf Trap National Park for the Performing Arts. Photo by Kristin Franco.

“Happiness can be found in the darkest of times, if one only remembers to turn on the light.” Thousands of people flocked to the light of the big screen for the third film in the juggernaut Harry Potter franchise, “The Prisoner of Azkaban ” this past weekend at Wolf Trap. This reviewer has seen this film multiple times, but was excited about this extra special performance; the film would be accompanied by the National Symphony Orchestra, playing the film’s impressive score by the indefatigable John Williams. Spoiler alert – they did not disappoint.

If you are one of the few people who hasn’t heard the name Harry Potter, his story of magic and bravery captivated a generation, and continues to cast its spell on people of all ages. He is a young orphan, who finds out on his 11th birthday that he is a wizard, and there is an entire magical world that he has never known. He goes off to Hogwarts School of Witchcraft and Wizardry to learn to use his powers responsibly, with plenty of adventure along the way. He is sorted into one of the 4 houses at Hogwarts: Gryffindor (Harry’s house), Hufflepuff, Ravenclaw, and Slytherin.

It’s wonderful to use these well-loved films to show young people that so-called “classical music” can be enjoyable and accessible.

His biggest adventure has to do with the evil wizard who was responsible for the death of his parents; Voldemort, or “He Who Must Not Be Named” to most. In the third film, “Harry Potter and the Prisoner of Azkaban,” Harry finds himself pursued by the notorious and terrifying Sirius Black, who has recently escaped from the wizard prison Azkaban. Harry and his best friends Ron and Hermione must race to find the truth before innocent lives are lost.

The National Symphony Orchestra joined with Cineconcerts again to present the full score of “Harry Potter and the Prisoner of Azkaban,” while the film played on the big screen. The NSO started this series last summer at Wolf Trap, with the first film in the series, “Harry Potter and the Sorcerer’s Stone,” and followed up with the second film, “Harry Potter and the Chamber of Secrets” over Thanksgiving weekend at the Kennedy Center. Steven Reineke, the conductor for the NSO Pops conducted this performance and acted as the evening’s charming host. Many fans like to sort themselves into the Hogwarts houses and have fierce house pride. At the start of the performance, Reineke asked the fans in the audience which houses they represented, resulting in loud cheers. He also encouraged the audience to react to the film thought the evening with cheers, boos, laughter, and applause. Finally, before the start of the show, Reineke announced that the winner of a local radio contest would get the opportunity to bring him his “magic wand” to conduct the performance. The lucky young wizard was 9-year-old Nash, in full Gryffindor costume, who did a fantastic job!

The performance was a fantastic evening of fun for people of all ages. The audience was made up of everyone from small children to grandparents, it looked like everyone had a great time. It’s easy when watching the film at home to forget how much top-notch music is in it, and how effectively it sets the mood for some very important events. The iconic music-box sound of the opening theme played live on the xylophone elicited cheers from the crowd. The scene where a mysterious dog corners Harry on the street at night was made infinitely more ominous by the sinister scratching sounds made by the string section. And when Harry goes for a ride on a glorious mythical beast, the majestic and soaring score almost made a tear come to your eye. The NSO did an incredible job with the score, making the experience unforgettable. The horn section was featured in the section where Harry took a ride on the “Knight Bus,” with a frenetic and delightful jazzy air, and there was also an impressive flute solo during the flight of an unfortunate bird into the Whomping Willow tree.

The performance was also greatly benefited by the beautiful venue of Wolf Trap National Park for the Performing Arts. It was a gorgeous night, with the recent unbearable heat finally breaking, and a breeze blowing through the open-air seating. The screen was nice and big so that everyone all the way back through the lawn seats could see things easily. The warm wood of the stage, strategically placed speakers, and architecture of the amphitheater made for surprisingly good acoustics for a fully outdoor theater. The staff was also so friendly and helpful; the entire experience was top-notch. It really is the premiere summer entertainment venue.

Finally, this series is such a great way for the NSO to continue introducing the power and magic of instrumental music to different audiences. It’s wonderful to use these well-loved films to show young people that so-called “classical music” can be enjoyable and accessible. This pairs well with the other live film performances, as well as the Ben Folds’ helmed Declassified series, to open up orchestral music to the masses. It is truly one of the things that make the NSO one of the best orchestras out there, that they are committed to producing music that can be enjoyed by so many different kinds of people; that is an important commitment to the arts and the community. While this performance has concluded, this reviewer sincerely hopes to see “Harry Potter and the Goblet of Fire,” pop up on the docket very soon.

Running Time:  Approximately 2 and 1/2 hours, with one 15 minute intermission.

Advisory: The film did have a few frightening moments that might be too much for young children.

For more information on upcoming NSO performances, including both “Jaws” and “Casino Royale” in Concert, click here.