Fringe Review: ’50 Ways To Date Your Aubrey’ by Nu Sass Productions at Caos on F 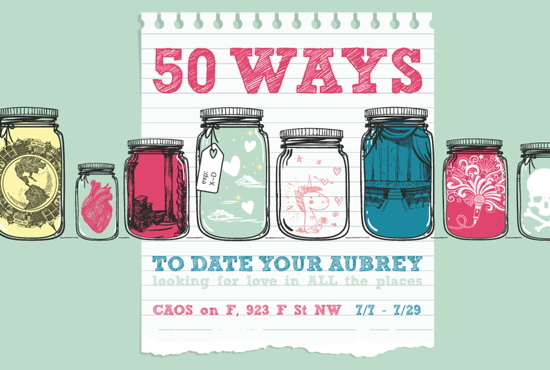 Let me get the first jaw-dropping moment out of the way immediately—Aubrey, played by Aubri O’Connor, also co-founder, co-producer and artistic director for Nu Sass Productions—looks eerily like Meryl Streep. I have never had the pleasure of seeing Ms. Streep on stage, but I would be willing to swear they both have outsize talents.

…the cast is so good and so exuberant that you just … enjoy the ride.

“50 Ways To Date Your Aubrey” has some genuinely laugh-out-loud moments, and O’Connor is delicious enough that some of the weaknesses of the script are glossed over. The basic conceit is an actress playing an actress in a show called “50 Ways To Date Your Aubrey” but which is interrupted with a new script, a sound board and light board that have been taken over by a deep, disembodied voice, and “audience participation” by Moriah Whiteman (as Moriah). Danny Rovin plays Danny the playwright, and Charles Lasky is Charles, the very tightly-wound stage manager.

It’s as if the seemingly patriarchal voice exists to force Aubrey to confront past pain and unvarnished truths, but the revelations really don’t provide a lot of dramatic tension or pay-off. Even though the set-up is that a polyamorous cis-bi actor gave an anti-romantic cis-het (male) playwright creative license to tell a (mostly) real-life story about the actor’s search for love, or even just a good connection, too often a story is interrupted and not finished. But the cast is so good and so exuberant that you just sort of ignore the half-hearted magic realism and enjoy the ride.

Nu Sass Productions seeks to encourage women in all aspects of theatre, on and off stage, including roles usually played by men. This production was perfectly suited to the very intimate space at Caos on F (which, to be honest, is a space I really enjoy seeing shows in because of the immediacy of it all); maximum use was made of some vaguely Greek columns and stones that represented her mental dreamscape.

This was an interesting idea—looking for love while not society-normative, and trying to keep your sense of self-intact and sheer willingness to be who you are in the face of an uncomprehending/unforgiving society at large. That might explain the mental dreamscape most of the action took place in, but it just didn’t have the Aha! moment.

And that really didn’t matter. The cast was so good and so plausible and so heartfelt that you wanted to keep listening and laughing and gasping. This is a wonderful way to relax and get away from the craziness of our day-to-day reality for an hour or so.

“50 Ways To Date Your Aubrey” is produced by Nu Sass Productions as part of the Fringe Festival, at Caos on F, Washington, DC. For more information, please click here.