Fringe Review: ‘A Slow Bullet’ by The Coil Project at Arena Stage Yellow 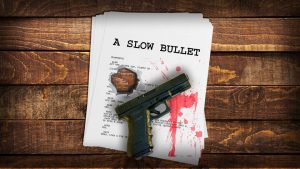 “A Slow Bullet” by the Coil Project at Capital Fringe Festival.

Erik Harrison’s “A Slow Bullet” is a rare example of a Capital Fringe Festival show that deserves to be longer.

It’s also something of a “meta-show,” to borrow a phrase from one of its characters. The play focuses on a small, close-knit regional theatre collective, struggling against maxed-out credit cards and the banality of local critics. It’s a creation of The Coil Project, itself a D.C. theatre collective that has been creating and mounting original works for the past four years.

With a full 80 or 90 minutes, Harrison could flesh out some of the supporting characters and clarify and contextualize some of the drama. I hope he will do so, and that this promising work will return to the local stage again.

The similarities, one hopes, end there, because while “A Slow Bullet” opens with the company doing a witty post-mortem on a poorly received new offering – playwright Alex (Andy De) revels in the critical pan – it soon becomes about the suicide of core member Kris (Michael Reilly), who had just finished writing an unrelentingly somber script which he intended to also direct and star in – doing a “Full Branagh,” as Alex puts it.

Troupe member Laine (Erica Smith), the company’s reluctant mother figure (and “everyone’s emergency contact”), had been tasked by Kris with destroying the script, but now brings it to the troupe to decide whether it should proceed – especially since a cynical theatre owner has offered to foot the bill, expecting Kris’s tragic death to fill seats. The comparison to the publication of Franz Kafka’s work after his death is obvious, and immediately raised by company member Jamie (Stacey Kruml), but this time, there are five Max Brods, not just one, to make the call.

There are also elements of “The Big Chill” in Harrison’s script, as the five survivors eulogize their comrade and peel the scabs off old wounds. Jamie originally seems slightly shallow, but Kruml gives the character layered strength as the hour proceeds. Leanne Dinverno’s Sascha begins as an abrasive misanthrope but is revealed to be passionately committed to her friends. Morgan is the least-developed of Harrison’s six characters, but Michael Silver brings pathos to the part.

“A Slow Bullet” mostly focuses on the company’s two writers, Alex and Kris, and their similar bonds with Laine. De, a solid comedic actor, is well-cast as wisecracking Alex and shows great emotion when the troubled person behind the punchlines is exposed. As Laine, who knows more about the circumstances of Kris’s death than anyone else, Smith is bracingly careful, knowing that she is tiptoeing across a minefield.

What flaws there are in the show seem tied to the limited production length. A key revelation about Alex seems forced but is justified by what follows. Some shifts in tone are abrupt, and one important flashback is confusing at first. (The production team makes a valiant effort to use lighting changes to make these shifts clear, but the limitations of the Arena Stage Yellow space, with its intrusive ambient lighting, makes this hard.)

I sense that Harrison wrote more, or at least intended to, and had to slash his text; in a brief post-curtain speech, he noted how the show used every minute of the production’s allocated time. With a full 80 or 90 minutes, Harrison could flesh out some of the supporting characters and clarify and contextualize some of the drama. I hope he will do so, and that this promising work will return to the local stage again.

“A Slow Bullet” at Arena Stage, the Mead Center for American Theater: Violet, 1101 6th Street SW in Washington, will run through July 25. For tickets and more information, click here.