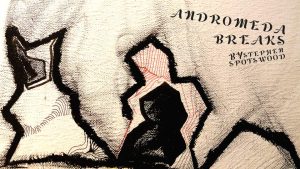 In the original tale, Andromeda is chained to a rock as a sacrifice to a sea monster as punishment for her mother’s boasting about her daughter’s beauty. She is saved by heroic Perseus, on his way home from slaying a gorgon, and the two marry. After her death, Athena hangs her among the stars as a constellation.

‘Andromeda Breaks’ relies on the strength of its actors, and director Nick Martin has chosen his well.

While all ends well for Andromeda in the myth, she is a figure without any agency, not uttering a single word in her own story — “the prototype for every damsel in distress,” as Spotswood writes in his show notes. His retelling wanders far from the source material to offer a modern story touching on official corruption, police brutality, and gender relations.

The 60-minute play opens with Andromeda Jackson (Billie Krishawn) chained, this time to a table in a police interrogation room, which along with two chairs makes up the entirety of the stark set. She is soon joined by police detective Percy (Jeremy Keith Hunter), who cajoles her into telling her tale without a lawyer present.

This Andromeda is the daughter of gangster parents on the rise. She was born into poverty but saw her fortunes lift as her parents gained wealth and power in their rural community. Percy also came from destitution — the two have a verbal duel over who had it worse — and never recovered from his mother’s drug-related death, for which he blames Andromeda’s kingpin mom and dad.

“Andromeda Breaks” relies on the strength of its actors, and director Nick Martin has chosen his well. Krishawn is fierce and uncompromising in the title role, while Hunter is first cool and seductive as Percy, turning hot when Andromeda turns the tables on him. Both actors command the space, and the audience’s attention, for the full hour.

Spotswood sprinkles his narrative with nods to Greek mythology; the misunderstood Minotaur plays a key role. There are also a few winking jokes (not to mention the characters’ last names, which mirror the main character of the Rick Riordan fantasy novels). Perseus does not rescue Andromeda this time around, and only one of our characters gets anything like a happy ending. The final reversal seems a bit pat and is the only part of the story that is not fully convincing. But this rushed conclusion should not keep you from seeing this impressive production.