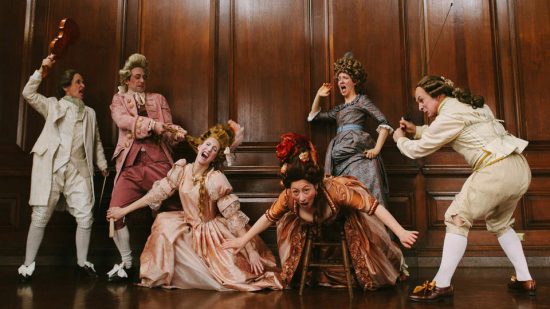 Happenstance Theater Company’s “Barococo” is a delightful hour that illustrates the full potential of the Capital Fringe Festival.

Happenstance got its start with the very first Capital Fringe and has evolved over the past dozen years into Washington’s premier clowning troupe. Its work has become ever more polished and more ambitious, and this production shows the company at its best.

“Barococo” introduces us to six flighty but charming members of the French nobility in the final days of the Ancien Régime, though they seem to exist in a timeless limbo. The six are trapped in a ballroom affair that repeats itself whenever Karen Hansen’s Doppio plunks out a tune on the harpsichord.

The six partygoers are waiting for something even they cannot define, and pass the time by engaging in increasingly silly games. Sabrina Mandell’s Olympia is the haughty centerpiece of the group, while Mark Jaster’s Astorio is the simpering narcissistic actor who revels in any attention. (At times, Jaster is the spitting image of Nathan Lane playing one of his more oleaginous characters.)

Sarah Olmsted Thomas is great fun as the dimwitted but good-hearted Dauphine Marionette; she is countered by Gwen Grastorf’s Constance, the most serious-minded of the set, and the only one prone to worry and self-reflection. Alex Vernon’s pompous Pamplemousse spends most of his time at the gala trying to get anyone to pay attention to him.

The outfits of the late Baroque and early Rococo periods that give the show its name were ornate and ridiculous enough that no further excesses were necessary — the cast’s costumes are period-precise. So too are their very careful gestures and movements, which could be inserted into a production of Molière or Regnard without adjustment.

It’s the heightening of the inherent absurdities in this scenario that make “Barococo” hilarious. The party games start off with wordplay but devolve into fencing matches that turn into brawls, and a side-splitting slow-motion food fight scene that lets the entire company show the strength of their clowning skills.

Time does occasionally break through into this sealed-off world; even the oblivious Dauphine is aware that something strange and violent is going on outside this private world. Pamplemousse makes a few efforts to leave, but fails in each attempt; the mention of the guillotine during one of the word games leads to nervous titters. In the end, it’s the triumph of the Revolution that serves as the literal showstopper, and final curtain for this group of ill-fated friends.