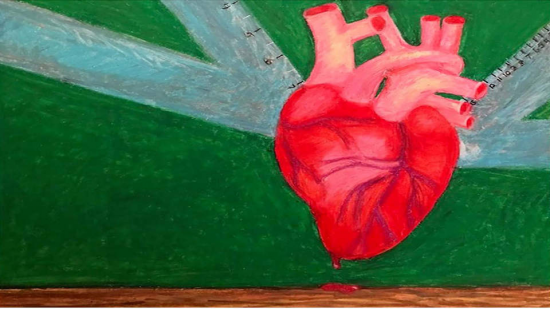 “Burn Out Blessings” by Al Baker at Capital Fringe Festival.

One-person show “Burn Out Blessings” by Al Baker, now playing at Capital Fringe Festival, gives a raw and touching depiction of a new teacher’s arduous journey to cope with the stress of surviving their first few years in the classroom.

I left the show feeling profoundly touched by Baker’s bravery in honoring their journey and loss in such a public forum with such honesty.

While the play touches briefly on a few moments from inside the school, the bulk of Baker’s story takes us through a graphically detailed account of their self-titled “ho phase.” Fair warning, you should have a strong tolerance for mature sexual themes as some of the raunchy humor appeared to make a few audience members uncomfortable.

Baker handled their reactions well, though, and even adapted some of their frequent sports and pop culture references on the fly when they were visibly going over the small audience’s head. (Due to the heavy downpour on Saturday afternoon, the audience was lighter than I expect it was at other showings.)

Baker’s storytelling takes an unexpected and gut-wrenching twist which I don’t want to spoil, but it completely changes the narrative from bawdy to heartbreaking. The emotional set-up of the first half of the play makes the sudden mood shift all the more dramatic and even audience members who may be a bit put off by the over-the-top sex stories will undoubtedly relate to Baker’s intense vulnerability in the second half of the show.

I left the show feeling profoundly touched by Baker’s bravery in honoring their journey and loss in such a public forum with such honesty. I recommend “Burn Out Blessings” as a deeply moving solo narrative of one person’s work to transform their pain into inspiration and hope for others who are suffering.

“Burn Out Blessings” by Al Baker is playing through July 28, 2018, at the Capital Fringe Festival at St. Augustine’s Episcopal Church. For more information, click here.