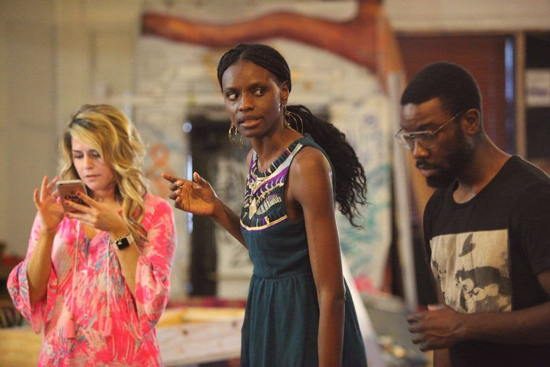 With “Heartbreak Hitman,” which just ended its run at the Capital Fringe Festival, Washington journalist Leigh Giangreco serves up what she calls a “love letter to D.C.” in the style of oh-so-many Manhattan-set romantic comedies. It’s also a love letter to Giangreco’s rapidly changing profession.

…Giangreco is on to something with her premise.

Giangreco was inspired by the true story of a British man who makes his living doing the dirty work of ending clients’ relationships for them. Giangreco borrowed this idea and transported it to the District, but this premise is really just the jumping-off point for this light, enjoyable glimpse at the lives of young professionals in the District.

Jon has been permanently furloughed from his job at an unnamed federal agency in the wake of the latest shutdown, and after aiding a friend with a breakup, stumbles into his newly invented job in the gig economy. He meets with cute Jo, a reporter at a big D.C. paper recently bought by a billionaire named Jeff. Jo’s harried editor, who is struggling to keep the respected outlet from becoming Buzzfeed, assigns Jo a profile of the man she dubs the “Heartbreak Hitman.”

The rest of the story goes about as you would expect, but manages to amuse. Walter Riddle is charming as bright, empathetic Jon, and as Jo, Jasmine Jones channels the brassy dames of past newsroom capers with ease. Will MacLeod steals his scenes as Jo’s quasi-boyfriend Asher, an Ezra Klein wannabe who drops names with each breath.

Others in the ensemble are also strong. Katie Kramer plays a handful of roles hilariously. Margot Trouve’s Nicole is underwritten as a self-absorbed Gen Z stereotype interning at the paper, but Trouve adds some shades to the role.

The District is a character as well, with Capitol Hill Books and Rose’s Luxury getting some love. Some jokes fall flat — a reference to Monica Lewinsky shopping at Kramerbooks would have been dated a decade ago — but others are fun, like hip Nicole’s touting of a new place in Shaw where you can eat pho while surrounded by feral cats.

Like some past Fringe shows set among the LinkedIn crowd in D.C., “Heartbreak Hitman” focuses on just one aspect of the diverse city. We’re told that Jon is a District native, but apart from his love of cheap eats with mumbo sauce, we see nothing of the city beyond the government-consultant complex. Jon makes a good point to Jo about how she looks down on participants in the gig economy while happily schmoozing with lobbyists for tobacco and Big Pharma, but that’s as close to examining the socio-economic divide as the script gets.

But Giangreco is on to something with her premise. Young professional D.C. would make a prime setting for a good ol’ rom-com, and the familiar places she sprinkles throughout would make a great backdrop. Perhaps her next step should be to reach out to the District’s indie film community and get this fun tale on screen, where it would work even better.