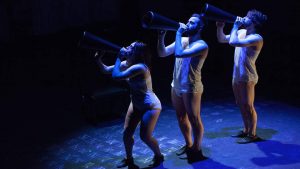 As I was enduring New Paradise Laboratories’ “O Monsters,” one of the five productions in the Fringe Curated Series at this year’s Capital Fringe Festival, I thought often of “The Emperor’s New Clothes.” Self-declared arbiters of the avant-garde were sure to emerge from the hourlong performance proclaiming it a work of brilliance, with pointed commentary on all sorts of matters of import.

But this show just doesn’t make any sense.

The Philadelphia troupe is undeniably talented, and there is joy in watching their synchronized movements, which at times take on a dreamlike, balletic quality. The performers’ choreography is meshed with perfectly timed technical choreography, as various objects — most notably a knife, a full breakfast, and a bevy of bouncing balls — fall from the rafters to center stage. All the elements of a wonderful piece of experimental theatre are here. Except the plot.

The Philadelphia troupe is undeniably talented, and there is joy in watching their synchronized movements…

We are presented with a mother and three children, living in some undefined state of isolation. (An electronic ticker sign upstage occasionally displays coordinates and data that suggest a space station or a bunker.) Over the course of the hour, slim details emerge about the children’s conception and disappearance of their father, known only as The Captain. It’s implied that their nervous mother might be at fault.

This slim narrative has possibilities, but most of what happens is only tangentially related. The show opens with a blaring cacophony that had some audience members covering their ears. The volume was so loud that once the performers began to speak, they could not be understood.

The noise mercifully subsided, but the action became no less obscure. One of the children moved a bathroom sign from stage left to stage right, then back again. The children moaned through bullhorns, with their mother responding with her own high-pitched wail. Tiles with words fell from the sky, and Mother read off phrases including “maniac emits disaster furious captain” and “master dark caress false.” The family pretended to be on a train. The children pretended to eat ice cream, and scream about it, for a taxingly long time.

If this makes sense to you, you are a greater aesthete than I.