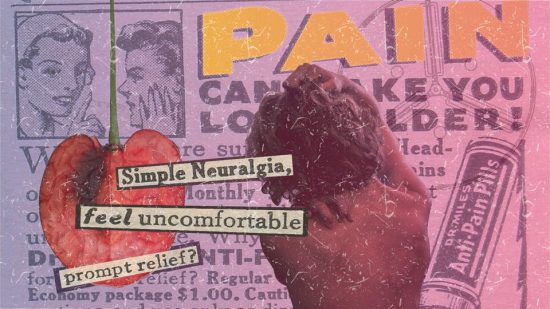 Caitlin M. Caplinger’s “Riot Brrrain” is a messy, confusing, raw, and real piece of theatre that takes the experimental nature of the Capital Fringe Festival and runs with it, sometimes in several directions at once.

…one of the most personal and honest shows being staged as part of this year’s Fringe Festival.

Dramaturg Sarah Pultz’s notes (which come in the best Fringe program I’ve ever seen) promise or warns of a “fractured portrayal of a journey with no real beginning, and no real end.” This is a show about gender-nonconforming Teddy, née Theodora, as they recall a series of real relationships, quickie encounters, and a long-term love that took years to realize.

Time jumps around throughout the 80-minute show, and members of the ensemble each play multiple characters, so it is often hard to tell exactly what is happening to Teddy when. This is intentional, and while it is disorienting, it is effective. Their mind is an overactive jumble, and that’s what we see. Teddy sums it up toward the end of the show, putting a spin on their preferred pronoun: “I’m a ‘they.’ There are hundreds of versions of me.”

Caplinger’s script is verbose and dense, and Ari Eckley as Teddy delivers some witty monologues with the rapid-fire pace of a genderqueer Gilmore Girl. “Riot Brrrain” deserves a look just for the star’s performance — Eckley is on stage for the entirety of the show, with a tome-thick script of lines to spit while dancing, cavorting, threatening, and wreaking havoc. It’s a great performance.

Their castmates, however, sometimes struggle with all the words. Some scenes take place at a conversational pace and cadence, and dialogue gets lost before it reaches the house. They are not helped by the weird acoustics of the Turquoise space at Blind Whino, a music hall-style venue that echoes like a haunted house. (This does work to the advantage of the show’s great original soundtrack by Panini Girlfriend, a post-punk band that sets the mood perfectly.)

Caplinger’s direction is less assured than their script. A staging conceit requires some actors to occasionally have their backs to the audience, which works fine in those scenes, but there are other times when blocking leaves actors who are speaking facing away from the house or off in the wings. While the free-form movements of the performers fit the spirit of “Riot Brrrain,” this again makes some dialogue hard to hear.

“Riot Brrrain” is an experiment, and mostly a successful one. If nothing else, it is one of the most personal and honest shows being staged as part of this year’s Fringe Festival.