Fringe Review: ‘The City Of…’ at Arena Stage Cradle 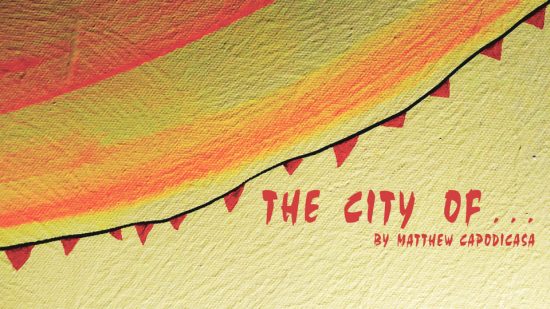 “The City Of…” at Capital Fringe Festival.

“The City Of…” at Capital Fringe, by Matthew Capodicasa and based on a short story by Argentine magical realist Jorge Luis Borges, is a funny, creepy, scary, and thought-provoking hour of theatre.

In an unnamed modern city, residents have started to lose their memories — first in the absentminded way we all do, of misplacing our keys and forgetting to pick up the dry cleaning, but soon snowballing into forgetting one’s address, loved ones, and ultimately one’s own name. This plague spreads gradually, and Capodicasa focuses on a single young married couple, Arthur (Nicklas Aliff) and Irene (Yesenia Iglesia), who at the start of the hourlong production have managed to hold on to their wits a bit longer than most.

‘The City Of…’ is an early standout among this year’s Capital Fringe offerings, and deserves an hour of your time.

The couple has quarantined itself from the rolling wave of amnesia by staying in their apartment, cataloguing the things they recognize and drilling each other on lists of 20 points to remember about each of them. As long as they can hold onto these things, they reason, they can hold on to their minds, and each other. Aliff and Iglesia also act out occasional upbeat newscasts in which the anchors slowly forget why they are on camera and what they are meant to be talking about.

Arthur and Irene must ultimately leave their cloister to purchase food, and while out in the streets, mixing among confused crowds, they forget their way home. This begins an odyssey in which they meet Z (Scott Sedar), an older man who has been trapped inside his own apartment because of a sudden excess of memory. Everything that he perceives sticks in his brain — he has memorized every page of every newspaper for the past several months — and fear of overload has kept him inside. He resolves to help Arthur and Irene, and to overcome his own fears at the same time, and ventures forth with them.

What follows is a phantasmagoria in which the talented Aliff and Iglesia also take on the parts of the funhouse freaks and nihilistic survivors they meet on their path. Capodicasa keeps Sedar in his original role, a constant observer; by having only Aliff and Iglesia play these other parts, their main characters’ slow decline in memory is underscored.

Director Patrick Pearson sets out “The City Of…” on a bare stage, with effective changes in lighting and subtle sound effects serving to paint the image of the fading city. All three actors are excellent, with Aliff and Iglesia sweetly realistic as the loving couple, and disturbingly cartoonish as the people they encounter. Sedar maintains a resigned stoicism that suits Z and contrasts with the bizarre events occurring around him.

“The City Of…” is an early standout among this year’s Capital Fringe offerings, and deserves an hour of your time.

“The City Of…” at Arena Stage, the Mead Center for American Theater: Cradle, 1101 6th Street SW in Washington, will run through July 21. For tickets and more information, click here.