Fringe Review: ‘The Truth*’ by A Muse Zoo at Blind Whino Yellow 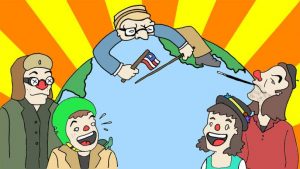 A Muse Zoo’s “The Truth*” at Capital Fringe Festival.

The stated premise of A Muse Zoo’s Capital Fringe Festival offering “The Truth*” — an “over-the-top comedy about political power and the winners of war” — might lead one to anticipate a zany but pointed satire along the lines of the Marx Brothers’ “Duck Soup” or a mix of slapstick and commentary like Charlie Chaplin’s “The Great Dictator.” A Muse Zoo does, after all, promise four dictators.

…a light romp dealing with human foibles more than power politics. And it’s quite fun.

Instead, the show from the Oregon clowning troupe is a light romp dealing with human foibles more than power politics. And it’s quite fun.

The odd, galley-like layout of the Blind Whino space would challenge any production, but A Muse Zoo adroitly makes do. The show is framed around a history lecture by a doddering, dyspeptic professor in a Commedia mask; he positions himself at one end of the playing area, while each of the leaders he will discuss appear in a “slideshow” at the other end.

Our lecturer (Mikey Hays) is going to fill us in on the war for Kudnanibonbar, a vast, resource-rich land at the center of a continent with four smaller nations at each of its corners. (Yes, it’s weird that no one had found Kudnanibonbar before — it’s like if Americans had just discovered Nebraska. The lecturer waves off this objection. This is a “just go with it” kind of show.)

He aims to show us why each of the four was unfit to rule, citing tyranny, addiction, and just general awfulness among the reasons. But as he is repeatedly forced to leave the room (usually due to irritable bowels), the slideshow image of each would-be conqueror comes to life to reveal The Truth.

Queen Petunia of Flowerton, played by a sprightly Alice Glass, has seen her meadowy homeland overrun by a jerk named Gary the Wasp. She hopes to frolic on in the fields of Kudnanibonbar. Gorgonzolia’s Jean-Pierre is the scion of a cheese-smuggling dynasty who wants to set his goats to graze to make more product. As Jean-Pierre, the rogueish Michael Diaz gets the show’s best line: “They have killed my mother for the last time!”

Sarah Brizek plays the show’s saddest and in many ways sweetest potentate, Molvius of Moleville, who is seeking a new underground home for his people after Moleville’s devastation by fracking. Kenzie Bizon is Jeff, Prince of Benmark, a dudebro Hamlet whose best friend is a tiny turtle. Jeff wants to either turn Kudnanibonbar into a water park, or a theme park with the theme of water.

This very talented team presents four essentially stand-alone skits, followed by the final confrontation. The bits themselves vary in silliness and level of success, but the whole cast is good throughout. As for why our lecturer has been able to turn these four gentle folks into monsters, and why none of their plans for expansion succeed — well, history is written by the winners.

“The Truth*” at Blind Whino Yellow, 700 Delaware Street SW in Washington, will run through July 29. For tickets and more information, click here.