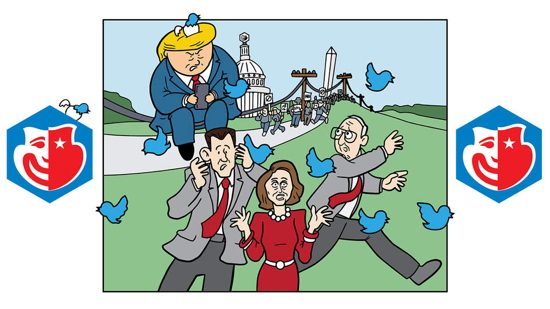 Recently the American political narrative has been pretty ridiculous, so much so that it has been difficult to decipher the truth from the fiction. Often times the truth has been so bizarre that it feels stranger than fiction. It can be difficult to approach these things humorously. For this year’s Capital Fringe Festival, directed by Nicholas Michael Bashourthey, created “Tweet Land of Liberty,” which throws the audience 100 years into the future as a means of looking back and reflecting on the current political climate.

This large ensemble worked together extremely well and flowed in and out of the scenes and complicated harmonies smoothly.

The year is 2118 and a new exhibit has just opened up at the National Museum of American History titled “The Trump Era.” A middle-aged, white, heteronormative couple (Sandy Swan Guidera and Jim Guidera) is going on a tour guided by a smart and knowledgeable museum staff member (Jen Ayer Drake). Along the way, they learn a lot about what we currently living while the exhibit sang quippy numbers about it.

The show covers everything from the Trump family, Stormy Daniels, Hillary Clinton, news talk shows, Safe Track, John Papadopoulos, #metoo, and gun violence. All of the music is original and upbeat, even when dealing with difficult issues.

This large ensemble worked together extremely well and flowed in and out of the scenes and complicated harmonies smoothly. Many of them played multiple characters and they all had clear distinctions.

The final number, titled “I Am America” is a beautiful anthem celebrating how all of us make up what it means to be an American. It reminds us of how great our country can be, and how not everything right now is bad. There is a lot of good being done, despite the government. The show was funny and at times, I think, could make the audience uncomfortable but it ended with hope that brings us all together.

Nicholas Michael Bashour directed this quirky and relevant piece. Robin Gold and Jon Glover were the props designers and they did well with the many props this show required, including a powerful image at the end of “Thoughts and Prayers,” a song about reactions to gun violence in our country.

Jef Smith designed the lights, which did a wonderful job of transporting us into the museum and out. The choices were clear and aided the storytelling well.

This show is definitely geared towards DC locals and those who keep up with the political situation. It contains a lot of inside jokes but also has a great deal of heart.

‘Tweet Land of Liberty’ is produced by Hexagon: 2018 as part of the Capital Fringe Festival, at Peppermint – Westminster Church. For tickets and more information click here,