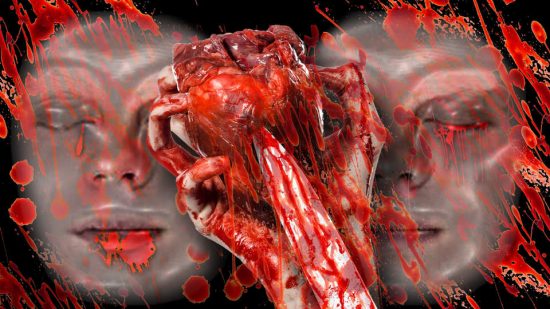 “Vengeance in My Heart” at the Capital Fringe Festival.

“Titus Andronicus” can be viewed as many things. Some have called it William Shakespeare’s effort to out-gore his macabre rival Christopher Marlowe; others say Shakespeare was satirizing the excesses of his occasional drinking buddy. Some call it a flawed early work; others say it is one of the Bard’s most underappreciated plays.

Foley crafts a many-layered version of a character too often seen as a caricature of a villain. His was easily the most sympathetic character on stage.

What people usually do not say is that it is bland. However, that is often the case with “Vengeance in My Heart,” Mediombo Singo Fofana’s curiously wan staging of “Titus” now running at the Capital Fringe Festival.

While the director calls this a “reimaging,” it is really just an abridgment. While full productions run about two and one-half hours, Fofana does his in just 70 minutes. (The listed run time of “Vengeance” is 80 minutes, though the performance I saw started 10 minutes late for no evident reason, and still ended on time.)

His cast is mostly satisfactory though unexceptional. Lines are delivered as in a Shakespeare Scene Study class, overly precise or unnecessarily stentorian. As Titus, Eamon Patrick Walsh seems almost unaffected by the rape and mutilation of his daughter Lavinia; Emel Haddad is similarly lacking in fury in portraying Lavinia. In several scenes, actors failed to cheat out and were hard to see properly.

This is a bloodless “Titus” in both fact and metaphor; in a play that calls for viscera, the stage remained spotless. (Body part props were obviously fake; when two decapitated heads fell to the ground, they bounced.) Flashing red strobe lights stood in for each bloody death.

For all of these issues, there are two great successes in “Vengeance.” The first is Miles Foley as Aaron. Foley crafts a many-layered version of a character too often seen as a caricature of a villain. His was easily the most sympathetic character on stage. In the scene where Aaron is called on to murder his own child, he is achingly sincere while maintaining Aaron’s jaded sarcasm (and delivering the most famous “yo mama” joke of the Elizabethan Age).

Also noteworthy is the famous dinner scene with which Fofana closes his production. Members of the ensemble set the table for the unwary royal couple’s feast with exaggerated comical movements, and Fofana’s decision to open this scene with whimsy is inspired. (Walsh is much stronger in this pivotal scene.)

These two elements offer hopeful indications about the director’s work. He is directing three shows at Fringe this year and maybe overextended (or just exhausted). Much of “Vengeance” does not work, but there are pearls of good ideas here. Rather than simply abridging Shakespeare’s original, Fofana might consider building a show around Foley’s Aaron and present this tale from the perspective of that outcast Other. That would be a show worth seeing.

Advisory: Recommended for adults only.

“Vengeance in My Heart” at Christ United Methodist Church Orange, 900 4th Street SW in Washington, will run through July 28. For tickets and more information, click here.