Opera Review: UrbanArias’ ‘Why is Eartha Kitt Trying to Kill Me?: A Love Story’ at Signature Theatre 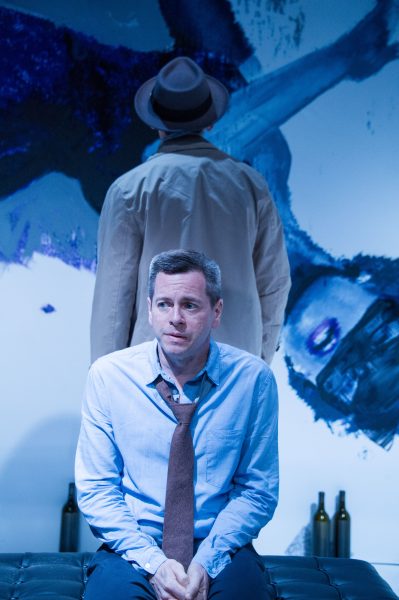 Keith Jameson as JB Williams in UrbanArias’ “Why is Eartha Kitt Trying to Kill Me?: A Love Story” at Signature Theatre. Photo credit C Stanley Photography.

This is opera? It was only an hour. The music was jazzy and energetic. It was funny. There was gratuitous partial nudity. The leading role was the only one singing (or speaking!). The story gradually exposes the depth of the lead’s psychosis…. Well, okay, there’s the opera.

“a smart take on what the medium can be: poignantly tragic, yet light and accessible.”

In all seriousness, UrbanArias’ production of “Why is Eartha Kitt Trying to Kill Me?: A Love Story” is a smart take on what the medium can be: poignantly tragic, yet light and accessible. The story takes place partly in a police interrogation room and partly in the mind of the story’s lead, JB Williams, played by Keith Jameson. Williams demands we believe his innocence in an unknown crime and that the fault lies with the late star of cabaret and film, Eartha Kitt. Fantastical, he knows, but just wait, the story hasn’t gotten weird yet. When it meanders to the topic of Joey Cocteau, an up and coming young artist first seen by Williams on the cover of a gay magazine, we are opaquely taken out of the interrogation room and into the mind of JB Williams.

As we are dreamily ushered through JB and Joey’s love story, subtle hints drop that perhaps not all of what we are witnessing is true – but do we accept this as innocently over-romanticizing a flirty affair or is our main character not being completely forthright with us? And if he is not, is it intentional dishonesty or does he fully believe his own story? The graying of this line is the crux of the show and the beauty of David Johnston’s libretto. Many can easily relate to an infatuation with a semi-celebrity, but where do we sharpen the focus of our own boundary in order to avoid the path traversed by JB Williams?

Jameson’s depiction of JB is convincing and he handles well the challenge of a one-voice show. When in the interrogation room, Jameson is entreating and direct with the audience. While in the mind of JB, Jameson sings conversationally, as if part of a larger cast. This dualistic approach enhances the intent of the libretto and creates depth in the story. He is joined on stage by actor Ben Peter, who cleverly and silently plays the roles of Detective, Eartha Kitt, and Joey Cocteau.

The score by Jeffrey Dennis Smith is vibrant and rhythmic, but most impressive in how it shades the emotions of the libretto. The jazzy riffs and plaintive motifs are played with polish and precision by the seven-piece on-stage orchestra, comprised of members of the Inscape Chamber Orchestra and energetically conducted by UrbanArias founder Robert Wood.

Each show is followed by a short and worthwhile talk-back where audience members can ask questions of the actors and design team. This provided interesting insight into the story’s creation and the process of setting it to music and stage. Director Sam Helfrich admitted to taking a few liberties, the most significant being the addition of Ben Peter’s multi-character acting role to what was originally a one-character conception. All seemed in agreement that this silent addition allowed for richer development of the leading role.

The intimate space at Signature Theatre was comfortably full with a sold-out audience. And why wouldn’t it be with such a fun and thought-provoking show that you can enjoy in about an hour? Catch it before the short run closes!

“Why is Eartha Kitt Trying to Kill Me?: A Love Story” plays again at Signature Theatre on July 13th and 14th.

Running time: just over an hour (90 minutes if staying for the talk-back).