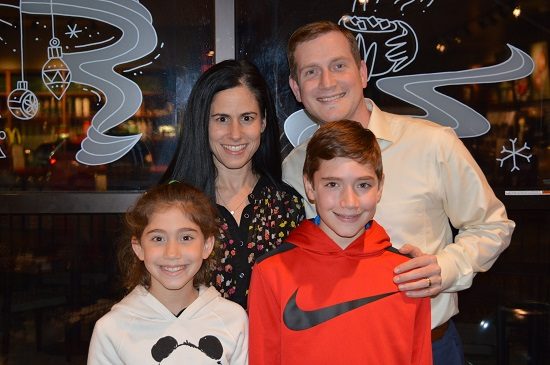 When you ask children a question, they usually give you an honest answer.

So, when Allison and Jeremy Goldman of Ellicott City asked their children during the school year of 2017 what they wanted to do that summer, the couple took their response seriously.

Brandon, 11, and Mallory 8, didn’t hesitate before replying: “We want to do Habimah again,” just as they had the summer before.

Habimah (meaning “the stage” in Hebrew), is a performing-arts and visual-arts camp — one of several J Camps summer camps at the JCC of Greater Baltimore. Habimah takes place at the Gordon Center for the Performing Arts in Owings Mills on the J’s campus.

The Goldmans signed up their children for two sessions of Habimah — totaling one month.

By the time that month was over, Allison Goldman recalled, Brandon and Mallory chanted: “I want to keep going; my friends want me to keep going. Can we please sign up, can we please do more”?

“They absolutely love Habimah, so how could we say no?” Allison Goldman.

“Habimah is now in its fifth year,” said Melissa Seltzer, Senior Director of J Kids Baltimore, “and every year it’s a little different.”

One major change that has taken place since its beginnings is that “Habimah started as a performing-arts camp, but now includes visual arts,” said Seltzer.

The camp offers four two-week sessions a summer, serving grades 1-8. Within each session there are three divisions, differentiated by grade.

Called by Hebrew terms, the division of the Yotzrim (Creators) is for youngsters in grades 1 and 2; Omanim (Artists), for grades 3-6; and Cholmim (Visionaries) for grades 7 and 8.

At first Habimah accepted only first through sixth graders, but when the campers reached grade 7 last year, they wanted to continue, Seltzer explained. The camp acquiesced.

Beyond providing area youngsters with the usual day camp fare, Habimah has a broader goal — to “reimagine the camp program and beyond that, to build an arts community, said Lewin.

However, Habimah is “artsy but also very campy,” he added. “We offer swimming — both instructional and free. The campers also learn leadership skills.”

Every camp session includes an art-centered fieldtrip — such as to the Rockville-based children’s theatre, Imagination Stage — and culminates in a final showcase and gallery at the Gordon Center to share the campers’ new and developed skills.

The other component that makes Habimah different from many camps is its Jewish environment, with Jewish values and Israeli culture. “Everything is seen through a Jewish lens,” said Lewin.

“We think it’s terrific that the camp introduced our children to Israeli culture,” said Allison Goldman and her husband, Jeremy.

The daily program includes several master classes — both in the morning and afternoon — and campers can choose which they’d like to attend from among those.

During free swim campers may opt to take an additional arts-related class, which changes every session. It might be creating a large mural or doing puppetry.

The Goldman’s love the camp’s diverse offerings. “It’s kind of like college, with all of these electives,” said Jeremy Goldman.

Another difference from many camps is that all campers participate in the final showcase.

“In other camps, they’ll put on a play with a lot of campers, but only one gets to be Annie,” Lewin explained. “Here everyone gets to be a star.”

“I think Habimah has really capitalized on and knew each child’s strengths and weaknesses,” said Allison Goldman. “And I think they played on that, so every child felt comfortable, and, at the performances, every child has a moment to shine in whatever it is [they excelled at] — whether it was circus or puppetry, or whether it was dance or music.”

Ultimately, said Lewin, the camp, like art itself, is a “journey, a process.”

The first session of the camp is underway, but registration is being accepted for the next three:
Session 2: July 9–July 20
Session 3: July 23–August 3
Session 4*: August 6–August 17
*Campers may sign up for only 1 week of Session 4, if desired.