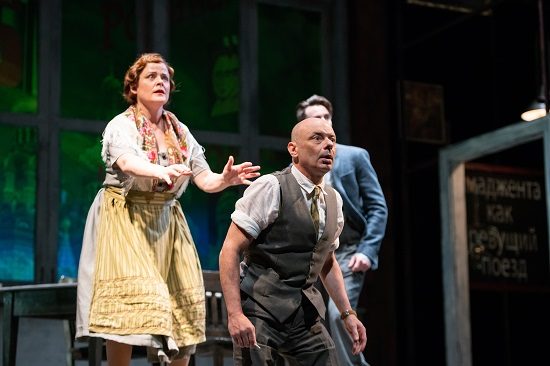 The 2018 Contemporary American Theater Festival lineup offers a diverse and multifaceted perspective on life in America. Each of the six plays stands solidly on its own, but together, they rise up and take us on an emotional and intellectual journey through some of the most critical issues we face in America today. Founder and Producing Director Ed Herendeen has again expertly curated the CATF season, featuring five world premieres out of six plays, by five female playwrights out of six. These plays make us think, debate, accept, reject, forgive, forget, and remember about topics ranging from propaganda and fake news to the religious right and same-sex marriage; from passionate unrequited love to trauma and profound loss; from gun violence, civil war, and scant resources to race relations, bigotry, and incarceration. No subject is taboo.

In “A Late Morning (In America) With Ronald Reagan” playwright Michael Weller sets out to discover the roots of President Reagan’s values. “I wondered what it might be like to honestly enter the mind of a person—really, an icon—who seems to have been quite straightforward, genuine in his heart and stood for virtually everything I don’t like. What would it be like to find out how he could hold his values?” Weller succeeds in achieving his goal; I certainly left the theater understanding more about Reagan the man, as well as more about politics and events of 1980s America and how they inform the political milieu of today.

Actor John Keabler does a fine job of portraying the Great Communicator in this one-person show. Thankfully he doesn’t attempt to imitate Reagan, but instead subtly captures his spirit, confidence, and sense of humor. Keabler aptly conjures Reagan: the way he leaned his head back and to the side when he laughed, his broad gestures, the way he lingered on a word for emphasis, his swagger. 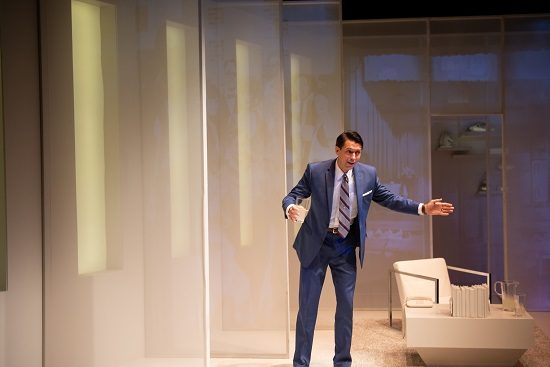 John Keabler as Ronald Reagan in Michael Weller’s world premiere of A Late Morning (in America) with Ronald Reagan at the 2018 Contemporary American Theater Festival. Photo by Seth Freeman.

This play completely sold out early in its run, a testament, perhaps, to the interest in revisiting a time in which manners, decency, and a moral sense were present in the Oval Office. Reagan’s speechwriter Peggy Noonan wrote an essay on Reagan for the book Character Above All: “In a president, character is everything,” she wrote. “A president doesn’t have to be brilliant; Harry Truman wasn’t brilliant, and he helped save Western Europe from Stalin. He doesn’t have to be clever; you can hire clever. You can hire pragmatic, and you can buy and bring in policy wonks. But you can’t buy courage and decency, you can’t rent a strong moral sense. A president must bring those things with him.”

“The House on the Hill” by Amy E. Witting is an intensely moving, suspenseful drama about the road to recovery and forgiveness following severe trauma and loss. Two cousins reunite after a 17-year separation and the mysterious circumstances of their estrangement are revealed in powerfully emotional encounters. In a fascinating dramaturgical twist, the characters are portrayed in real time (in their mid-30s) and as young teens, often with one grown-up cousin interacting with the teenage version of the other. Joey Parsons as the older Alexandra and Jessica Savage as the older Frankie skillfully capture the emotional depth of these two women in pain, and together with their younger selves played by Sam Morales and Ruby Rakos, they reveal the story with nuanced and powerful acting.

Another new play by Witting has just been chosen to be a part of the American Shakespeare Center’s Shakespeare’s New Contemporaries program. “Ann Page Hates Fun,” a companion piece to “The Merry Wives of Windsor,” will be produced in repertory along with four other productions in February-April 2019 at the Blackfriars Playhouse in Staunton, VA, just two hours down the road from Shepherdstown.

Bekah Brunstetter’s “The Cake” takes place in “Della’s Sweets,” a tiny bakery in North Carolina, cheerfully captured in David M. Barber’s 1950s retro set. Della is thrilled to see Jen, the daughter of her deceased best friend, who returns home from New York to plan her wedding. Della agrees to bake her wedding cake until she finds out the groom is actually not a groom, but a bride. Della struggles with her belief system as a devout Christian, and along the way reexamines the love and passion (or lack thereof) in her own marriage.

This tightly constructed play is both profound and quite funny. Erika Rolfsrud perfectly captures Della’s exuberance, sensitivity, and insecurity. Lee Sellars as Della’s husband nails a scene near the end of the play that had the audience in hysterics. Each character learns something and grows a little closer to understanding, tolerance, and even acceptance. 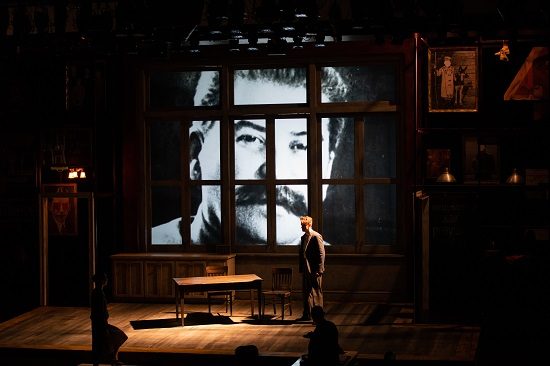 David McElwee in D.W. Gregory’s world premiere of Memoirs of a Forgotten Man at the 2018 Contemporary American Theater Festival. Photo by Seth Freeman.

D.W. Gregory’s “Memoirs of a Forgotten Man” was for me the highpoint of the Festival. This play hits on so many levels and packs an emotional punch I couldn’t have anticipated. David M. Barber’s set makes effective use of projections, with an image of Stalin menacingly fading in and out, a reminder of his campaign to rewrite public memory during the Great Purge of the 1930s.

Alexei S. is the central character of “Memoirs,” who is gifted with an exceptional memory. He even remembers his birth. The early years of the Soviet Union were not a great time to be a journalist with a photographic memory since after people disappear, they get “photoshopped” out of photos and erased from history books. When Alexei points out a “mistake” in the form of a missing person in a photograph to accompany a story he’s writing, his editor retorts: “Comrade. How is it you do not understand me? This is the approved photograph. It came from the Central News Bureau.” Alexei responds: “That’s so strange. Why would the Central News Bureau approve a mistake?” Alexei struggles with forgetting, pretending not to know, or even lying, and his inner conflict fuels the dramatic roll-out of this compelling play.

The beauty of “Memoirs of a Forgotten Man” is its ability to live on different planes at the same time.  It’s a personal story about a mother and her two sons in a time of great chaos and fear. It’s a political story about how dictators use propaganda and “fake news” to instill fear to gain ultimate power. It’s a suspense drama as we wonder if Natalya Berezina (a psychologist who is trying to get government approval to publish her research into Alexei’s condition) is safe as she is barraged by probing questions by Kreplev, a government investigator who will give her paper a thumbs up or thumbs down.

Gregory’s characters are intricately wrought, double casting is brilliantly and surprisingly employed, and the entire production soars to an intense, dramatic climax. I predict this play will become one of the most produced new plays across the country in coming years.

Also included in the repertory are “Berta, Berta,” by Angelica Chéri, a passionate love story of tragic proportions, and “Thirst,” by C.A. Johnson, a post-apocalyptic tale about race, bigotry, and survival. Both plays feature some terrifically powerful acting and playwriting.

I highly recommend spending a weekend in the funky and quaint village of Shepherdstown and seeing the entire repertoire in a two or three-day period. You’ll come away reinvigorated, mentally stimulated, and emotionally charged. The current season runs through July 29, 2018, and tickets and information are available at catf.org or by calling 800.999.CATF.

Beth Hauptle is a marketing and communications professional with 36 years of experience in marketing for arts, entertainment, hospitality, lifestyle, and other small to midsize businesses. She served as the chief communications and marketing officer for 19 years at four major Washington/Baltimore regional theatres: Baltimore Center Stage (two years), Studio Theatre (three years), Shakespeare Theatre Company (twelve years), Arena Stage (two years). In between Shakespeare and Studio she operated a successful consulting practice for 12 years. She returned to consulting in the summer of 2017. She recently began freelance writing and has written for Maryland Sip and Savor, Her Mind, and Radius magazine. Her website is highfivemarketingsolutions.com.