Theatre Review: ‘9 to 5: The Musical’ at Newtowne Players 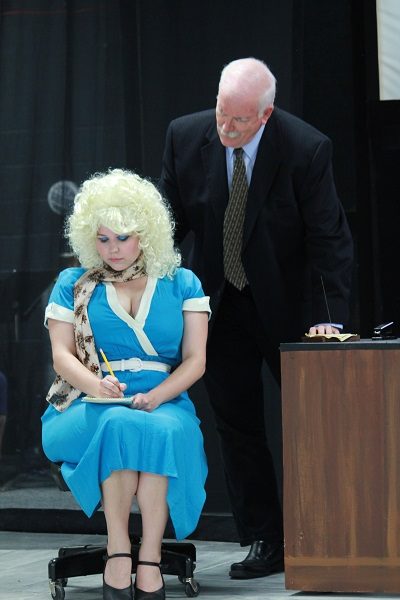 What better time than in the age of the #MeToo movement is there to put on a comedy about gender equality in the workplace than right now? The Newtowne Players of Lexington Park, MD capitalizes on this controversial subject matter in “9 To 5: The Musical” with the help of witty writing and sassy songs by Dolly Parton (who starred in the original 1980 film version) and Patricia Resnick (who co-penned the screenplay).

When the show opens, we are introduced to the typical unsatisfied working class in the show opener, appropriately titled, “9 To 5,” which is followed by us being taken into the office life of the secretary staff at Consolidated Industries Consolidated is run by the most “sexist, egotistical, lying, hypocritical bigot” boss in the world, Franklin Hart (Greg Rumpf), who gives a laugh out loud performance in the musical number “Here For You.” As expected, the women of the office do most of the grunt work while seeing the men continue to climb the ladder of success and make more money than them for doing the same job. It’s almost hard to believe that this is still a relevant topic almost 40 years after the film was made. Makes you think a little, doesn’t it?

The office hosts a lively crew of women (except for the constantly drunk and sleeping Margaret, hilariously played by Aubrey Joyce). We meet the leader of the secretaries, Violet (Stacey Park), who has been working towards that promotion that always seems to go to man. She is about at her wits end with Mr. Hart’s treatment of the staff. Amongst the staff is the beautiful, vivacious (and very Dolly looking) Doralee (Emily Quade), who cannot understand why no one likes her until it is brought to her attention that Mr. Hart has been telling everyone that they are having an affair. Last to the trio of ill fated workers is Judy (Lindsey Norris), who has no job experience and is plunged into the workforce following the divorce from her ex-husband (conveniently named Dick) who ran off with a 19 year old named Mindi. (That’s right! Mindi…with an I!)

Violet, Doralee, and Judy end up finding their way together as friends after certain events take place, such as Violet finding out she was passed over (again) for that promotion she has worked so hard for; Doralee, finally clearing her name about the affair that never happened and Judy, well, just finding friends. They spend an evening together hilariously stoned, thanks to a joint provided by Violet’s son, Josh (Chad Leo), where they contemplated exactly how they would get even with Mr. Hart in the series of revenge fantasies “Dance of Death,” “Cowgirl’s Revenge,” and “Potion Notion.”

If you have the chance, I highly recommend that you get out and enjoy this hilarious comedy…

The next morning, as Violet is making Mr. Hart’s coffee, she realizes that his “sweet and skinny” coffee sweetener box is a dead ringer for the rat poison box, (conveniently kept in the same cabinet?) and begins to think that she accidently carried out her murderous fantasy from “Potion Notion” and has a complete meltdown in the bathroom, which is heard by Mr. Hart’s secret admirer (and office snitch), Roz (Megan Rankin Herring), who reports the incident back to Mr. Hart. Together, they plot to take down the trio for attempted murder by setting them up to believe he was taken to the hospital and died. This, of course, sets a chain of hilarious events into motion as Violet goes between plans of stealing the body to turning herself in, while Doralee and Trudy try to convince her to just run away. The hospital scenes are quite comical, even the supporting cast get some big laughs, including Amanda LaPore’s brief running squat across the stage in mid-labor.

Once the trio realizes that they were set up by Mr. Hart, they get in a bit more over their heads and decide that the best thing to do is to kidnap him and keep him hostage while they figure out how to fix the situation, and their office in the process. This leads to several positive changes in the office. No one really seems to miss Mr. Hart. The office is thriving, the women are more confident and the only sexual harassment present is a younger man, with genuine interest and respect for the widowed Violet, Joe (Timothy Joyce), who is willing to do anything to help and finally get taken seriously by Violet.

It is an interesting look at what would/could happen if we stood up for ourselves in the workplace- to the extreme, of course, and in a comical way. It is satisfying to see someone finally stick it “to the man” who really could have had about everything he wanted had he only returned the affection of his faithful assistant who would have gladly fulfilled his every sexual desire. I have to admit Roz (Megan Rankin Herring) gave one of the funniest performances of the evening in “Hart to Hart.” If only, he had shared her attraction, a lot of this mess could have been avoided. But, where’s the fun in that, right?

For the rest of story and office shenanigans, you’ll need to buy a ticket. It is well worth every penny and bridges many age gaps. (I brought my 17 year old son, who easily laughed as much as I did!)

The costumes were fun and the set was very interesting as it involved several rotating flats, which allowed for quick set changes and kept the story moving along. The music was spot on. It’s hard to go wrong with Dolly Parton when she is writing sassy!

Another fun observation was seeing that even the theatre’s support staff got in on the “If a man can do it, so can we” movement. One of the female ushers grabbed a screwdriver from backstage to refill the toilet paper dispenser during intermission. It made me wonder if director Michelle Ebert Freire was working with the ushers too! I have to say, The Newtowne Players not only work their show, they live it and seem to have a great time doing it. It is one of the pleasures of seeing community theatre- watching a group of strangers become a family during the show. You could tell that everyone was having fun up there, which always makes for a better show!

If you have the chance, I highly recommend that you get out and enjoy this hilarious comedy, which runs through July 29.

Running Time: The show is approximately 2 1/2 hours, with a 15 minute intermission.

“9 To 5: The Musical” runs through July 29 at The Newtowne Players. Tickets are $18 (general admission) and $13 (students, seniors, military and kids 13 and under) and can be purchased here.