Theatre Review: ‘Ain’t Too Proud: The Life and Times of The Temptations’ at The Kennedy Center 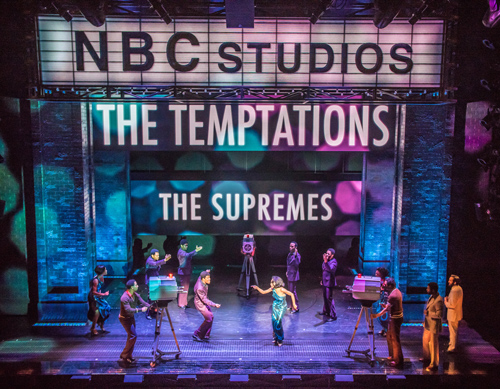 The cast of Berkeley Repertory Theatre’s “AIN’T TOO PROUD.” Photo by Joel Dockendorf.

Currently The Kennedy Center is hosting the latest in what has become a popular genre over the past decade – the jukebox musical, based on real-life stories and music of highly successful pop stars in the 20th Century (“Beautiful: The Carole King Story,” “Motown the Musical,” “Summer: The Donna Summer Musical,” to name a few, with more on the way). This latest production focuses on the music and lives of a group considered by Billboard as the greatest R&B group of all time and part of the Motown juggernaut – The Temptations, known for their smooth moves and monumental hits. From its record-breaking world premiere at Berkeley Repertory Theatre to its pre-Broadway run in D.C., “Ain’t Too Proud” boasts an acclaimed creative team that includes Kennedy Prize-winner, writer Dominique Morisseau, two-time Tony Award-winner, director Des McAnuff, and Olivier Award-winner, choreographer Sergio Trujillo.

…brings the classic Temptations to life in this dazzling production.

It is important to note that McAnuff and Sergio were also the director and choreographer for a show that could legitimately be considered the best of the genre. The Tony Award-winning “Jersey Boys,” the story of Frankie Valli and the Four Season, was one of thelongest-runningg shows on Broadway with standing companies and tours world-wide.

If you loved “Jersey Boys,” you are going to love “Ain’t Too Proud.” Therein lies its success and some of its issues. McAnuff has used the same template that worked so successfully for “Jersey Boys” in this production. The staging (though slicker, with a bigger budget) and face pace are similar and many times even some of the dialogue and storyline felt like déjà vu. Actors play multiple roles and three women cover all the female roles. There are many other parallels.

It doesn’t have the depth of “Jersey Boys” whose real life story also had many twists and surprises. Loaded with over 31 hits, “Ain’t Too Proud” quickly skims the surface of the light and dark side of fame that faced the group, including marital issues caused by being on the road – something universally shared by Valli and so many other performers.

Otis Williams, played by the steady Derrick Baskin, is the last man standing of the original five Temptations and the narrator. The story is based on his 2012 memoir. Though the other original members fell to illness, alcoholism, drug overdose and suicide, the group is still performing, even through 24 iterations through the years.

Rising up from the mean streets of Detroit in the 1960s, the musical takes us through to 1974 in the life of The Temptations. After serving six months in juvenile detention at 16 (the judge sent Valli home with his mother), Otis Williams vows a different path. Influenced by the doo wop sound of the Cadillacs and Pips, Williams forms his group with four other members. After extracting themselves from the grips of a shady female manager, he supposedly corners Barry Gordy (Jahi Kearse) in the restroom who recommends, among other things, a name change. Thus the Temptations was born.

Gordy ran Motown like the MGM movie studio in its heyday. His acts were taught how to dress, walk, talk and dance. They were groomed to cross over and appeal to white audiences as well as black. But it was the music that won the world over. First, with the great songwriter/producer, Smokey Robinson, and then with Norman Whitfield, The Temptations competed and then eclipse even Gordy’s pet group – The Supremes – with hits like “My Girl,”  “Ain’t Too Proud to Beg,” “Get Ready,” “If You Don’t Know Me by Now,” “I’m Gonna Make You Love Me,” “Pappa Was a Rollin’ Stone.” and “Just My Imagination.” The civil rights movement swirled around them but we only see a brief taste as their bus is attacked on a tour of the south and MLK Jr.’s assassination is mourned with “I Wish It Would Rain.”

The biggest source of contention was ego and control especially between Williams and the brilliant showman David Ruffin (a stunning and powerful performance by Ephraim Sykes). His abusive treatment of his girlfriend, singer Tammi Turrell (Nasia Thomas shining bright in the duet with Sykes, “If I Could Build My Whole World Around You”), his increasing drug addiction and unreliability caused Ruffin to be forced out of the group. Surprisingly, he would occasionally talk himself on stage during a concert and sing with the equally talented, new lead singer, Dennis Edwards (Caliaf St. Aubyn).

Jeremy Pope as Eddie Kendricks (the crooner), James Harkness as Paul Williams (the soul and no relation to Otis) and Jawan M. Jackson as Melvin Franklin, the bass (affectionately known as Blue), round out the Temps’ “classic five” and each gets a chance to shine. Candice Marie Woods as Diana Ross and Rashidra Scott as Otis’ wife also get their moments in the spotlight with some showstoppers of their own. In fact, the entire cast brings its “A” game to this production.

The creative team is packed with other Tony Award® nominees and winners and it pays off  with a simple yet vibrant backdrop to the musical. Tony nominee Robert Brill’s Chinese puzzle box set design is constantly in motion. It is complemented by lighting design, sound design and costume design by Tony winners, Howell Binkley, Steve Canyon Kennedy and Paul Tazewell respectively as well as projection design by Drama Desk Award winner, Peter Nigrini.

The story is thin and similarities to “Jersey Boys” is apparent but it can stand alone as pure entertainment. With a tireless cast flawlessly performing those indelible hits coupled with Trujillo’s breathtaking choreography, “Ain’t to Proud” brings the classic Temptations to life in this dazzling production.

Running Time: Approximately two and a half hours with a 15-minute intermission.