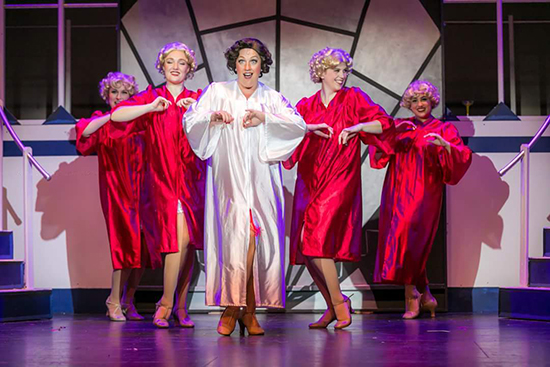 With music and lyrics by Cole Porter and an original book by P.G. Wodehouse (with Guy Bolton, Howard Lindsay and Russel Crouse, and a new book by Timothy Crouse and John Weidman) it’s no surprise that the story is fun, funny and light as a feather. Set in the 1930s, the action centers on our hero Billy (Rinaldo Martinez), an affable everyman. At the beck and call of his Wall Street boss (David E. Elvove), the top of the show finds him newly in love with a young woman he thinks is out of his league. That woman is not Reno Sweeney (Melani Drummer), a dynamite nightclub performer who might like to be more than Billy’s best gal pal. As it happens, Billy’s actual love, the young debutante Hope Harcourt (Jackie Rogers), turns out to be sailing on the very ship Billy’s boss is also departing on – requiring Billy to risk his job and stow away in order to try to steal her affections from her new fiancé, the humorously priggish, and highly monied, Lord Evelyn Oakleigh (Paul Loebach).

Rockville Musical Theatre’s new staging of this classic gem fully lives up to its promise, delivering a jolly evening of solid entertainment.

Wodehouse’s sly and dry humor is woven throughout the snappy script, distributed generously among the characters. In their first scene, Reno chides Billy for leading her into thinking they were dating, when in fact he was in love with Hope. “You had me thinking you wanted to marry me!” she complains. “How could you think that? I always treated you with respect,” Billy retorts with surprise.

The powerhouse of the show, Melani Drummer is stellar as Reno, in both voice and characterization. She gets to show off her incredible range, from her opening solo, “I Get a Kick out of You,” to the show-stopping “Anything Goes” that sees her fronting an all-dancing, all-singing number with the full ensemble. Drummer as Reno also exudes a confident, seen-it-all aura that marks her as the friend you want in your corner.

Rinaldo Martinez as Billy is just right as an earnest, sometimes honest, young man trying to attract the upper-class Hope, a role played with equal talent and poise by Jackie Rogers. Their rendition of “It’s De-Lovely,” always a highlight of the show, is well done and appropriately ear-wormy. Jordan Clifford as Moonface Martin, a gangster on the lam, and Marcie Schwartz, a displaced girlfriend of his associate, deserve special mention for their part in the comedic hijinks Billy employs to get Hope’s attention. Schwartz especially boasts a comic talent, punctuating her broad-accented delivery of some sharp one-liners with a flick of the head or roll of the shoulder.

Director Dana Robinson does an excellent job staging a fine-looking production. The saturated colors of the lighting design by Sarah Randles and Andrew R. Dodge turns to spotlighting on a dime during the more contemplative or romantic songs. The lighting pairs well with the clean lines of Eric Henry’s ocean-liner set. Glamorous costumes of satins and sparkles by Ginger Ager and Lee Michele Rosenthal work seamlessly with Hayley North’s spiffy choreography.

The live orchestra, conducted by Stuart Weich, expertly navigates Porter’s score, from the punchy muted brass of the bigger numbers to the softer strings of Billy and Hope’s romantic duet, “All Through the Night,” and back to full energy for a happy finale that sees the conclusion of a couple romantic unions.

As the title would suggest, the show has a little something for everyone; it’s musical and farce, bawdy but sweet, with slapstick and slick dance numbers. Rockville’s production reminds us why it’s pretty much anything, and everything, you could want in a musical.

Running Time: About 2 1/2 hours with one 15-minute intermission.

“Anything Goes” plays through July 22nd at the F. Scott Fitzgerald Theatre at Rockville Civic Center. For tickets or more information, click here.