Theatre Review: ‘Catch Me if You Can’ at Port Tobacco Players 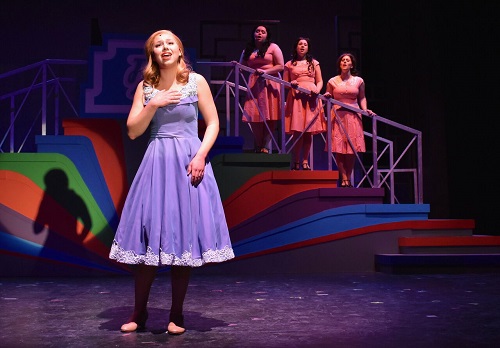 When I first heard the name of this play, I immediately thought of all the games I’d play as a kid where the taunt “Na na, you can’t catch me” was often heard. After seeing the show put on by Port Tobacco Players this past Saturday evening, I think that memory is the most adequate way to describe the plot. Essentially, there is a constant taunting in this game of ‘can you catch me,’ which really does transfer quite well in the relationships explored between Frank Abagnale Jr. and Carl Hanratty. Add in complicated backstories, an ensemble of colorful characters, and the voice of reason (aka the girl of his dreams), and you have just summarized “Catch Me if You Can.”

…it was the energy of the performers and the dedication to their craft that made the performance for me. These individuals truly left it all on the stage.

Based on the Dreamworks Motion Picture production that carries the same name, “Catch Me if You Can” features jazzy show tunes that will have your toes tapping. Port Tobacco Players in La Plata took on this musical and certainly stayed true to its original character. Interestingly enough, the show is based on the true story of con man Frank Abagnale Jr (portrayed perfectly by Matt Jones). At 17, this boy takes the world by storm as he poses as an impressive variety of professionals and forges an amazing number of fake checks, all the while stumping FBI agents such as Carl Hanratty (played hilariously by Michael J. Margelos).

Port Tobacco Players’ rendition of this movie turned musical is fast-paced, so be prepared to keep up as the cons fly. The music (composed by Marc Shaiman) and lyrics (by Scott Wittman and Marc Shaiman) will certainly catch your ears. The book (by Terrence McNally) captures an intriguing story, but I feel that it could do without some of the adult humor and language. Honestly, the show is an adequate show, prepared to provide a decent performance.

Director/choreographer Brooke Howells clearly specializes in creating beautiful staging/choreography, as the show featured many wonderful stage pictures that simply dazzled the viewer. Of course, while it takes a choreographer’s eye to create such staging during dances, it was the dancers who truly made the dream possible. Kudos to the ensemble for keeping up with this difficult choreography! My only critique for the dance numbers is that they were, at times, a bit overwhelming to the eye.

The set (constructed by John Merrit and team) featured a double staircase, leading to a center point, which served functionally for beautiful stage pictures and also gave the illusion of Abagnale’s climb to success. Costumes (designed by Quanny Carr and Christopher R. Smith) were creative and captured the show’s many different cons/characters. My favorite pieces were the airline costumes, although the school children outfits were fun as well!

The tech side of the show was carefully planned, with aptly timed lighting and spotlights that always found their mark perfectly (kudos to the lighting crew, led by Tommy Scott). The sound team was also practiced, although it seemed as though they were having some trouble balancing the pit and the singers. The show also featured the technical effect of real gunshots using blanks, which was pretty cool when not accompanied by sound effects. However, I think the additional sound effects used at one point were unnecessary, as they took away from the effect of the real shots.

As always, the performance given by the team of actors, designers, techs, and managers over at Port Tobacco players was practiced, decent, and fairly uneventful. Even when lines or song lyrics escaped an actor’s memory, the show kept moving forward with undeniable spunk and character. If you could take away the playboy mentality with showgirls in skimpy costumes and the adult humor/language, this show tells a very touching story that I truly enjoyed.

Perhaps my favorite number in the musical is “Fly, Fly Away,” sung by Brenda Strong (portrayed dearly by Anastasia Ross) in the second act, as we all know how hard it is to let go of something or someone we love dearly. Truthfully, it was the energy of the performers and the dedication to their craft that made the performance for me. These individuals truly left it all on the stage. The only question that remains is ‘will you catch it if you can?’

Advisory: Adult language, sexual references and innuendos, drinking, and suggestive materials and dress are used throughout the show. Also, real gunshots are used multiple times, utilizing blanks. The show is best suited for high school and up.

“Catch Me if You Can” plays at Port Tobacco Players in La Plata, MD until August 5, 2018. For more information, or to purchase tickets, please see here.