Theatre Review: ‘Come Back to the Five and Dime, Jimmy Dean, Jimmy Dean’ at Cockpit in Court 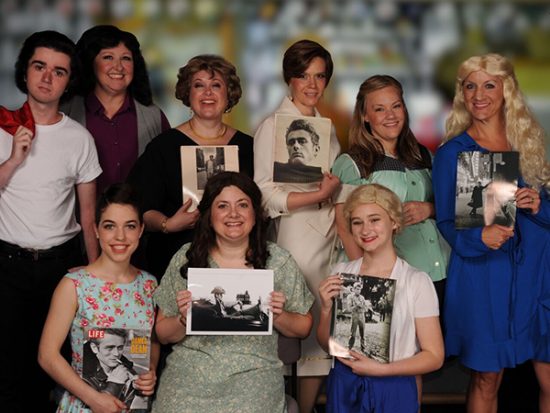 I’ve not seen a lot of the little gems that Cockpit-In-Court puts on in their charming theatre in the round upstairs of their main auditorium.  If the one currently running is any indication, I need to get up there more often.  “Come Back to the Five and Dime, Jimmy Dean, Jimmy Dean” (hereafter shortened to “Jimmy Dean”) is not without some minor flaws, but the sum total is greater than its parts and it’s certainly worth a look.

This production did not disappoint.  It’s a perfect little glimpse into the lives of some people who will remind lots of us of someone we know.

Written by Ed Graczyk, “Jimmy Dean” premiered in 1976 in, of all places, Columbus, Ohio. Considering the flimsy inspiration for the play, I suppose it was as good a place as any to bring the characters to life.  When asked about it, Graczyk said it was after a visit to Marta, the small Texas town where the actor James Dean had filmed “Giant,” and Graczyk saw the crumbling façade of the set piece for the grand house in the film that he got the idea for the play.  Just goes to show you that inspiration can come from the darndest sources.

Graczyk set his story in the small Texas town of McCarthy, in 1975.  20 years earlier, a handful of teenage worshippers of James Dean had their lives changed by the proximity of the filming of Dean’s movie, where one of them is selected to be an extra.  The action shifts between a reunion of the group in 1975 and the events surrounding them all in 1955. Lies are brought to light, deceptions revealed, confidences betrayed, yet bonds between friends are strengthened through ugly truths, and all of it is set in a dusty, backwater Woolworths under a scorching heatwave.

The production is cleverly directed by Linda Chambers.  It is always a challenge to stage a play in a four-sided theatre and Ms. Chambers makes excellent use of the space most of the time.  There are occasions when it is just not possible to see a particular bit of business from every seat in the house.  In this case, there is an apparition that appears through a screen door that was entirely blocked from view from my seat in the house.  Luckily, I was familiar enough with the material to know what it was that was eliciting a response from the actor on stage – others in my vicinity probably have no idea to this day what it was.  Otherwise, the blocking was nicely done.

While there were brief instances when the pacing might have been a tad brisker, the languidness did contribute to the overall inertia of the scripted heat wave the characters were laboring in. Hayden Muller‘s lights played over Moe Conn’s set, which looked a little shiny and new to me to be set in a dusty, Texas heat wave but was otherwise well constructed.  Nicole McClellan Smith dressed the cast appropriately.  I especially appreciated the saddle-shoes on the girls in the scenes set in the ‘50s.  And the expertly tailored ensemble worn by Joanne was lovely.

Standouts in the cast were, well, everyone.  Liz Boyer-Hunnicutt turned in yet another outstanding performance as Juanita, proprietress of the Five and Dime.  Her Texas twang was so thick you could cut it with a knife and it never faltered, something that can’t be said of most of the rest of the cast.  Jennifer Skarzinski was all blond hair and brass as Sissy, a sassy Texas good ol’ girl with a secret or two of her own, despite her unflagging bravado.  Ms. Skarzinski knows how to work a stage and keep the attention focused on her talented acting skills.

Regina Rose’s Mona was a study in hysteria and quiet determination rolled into one excellent characterization.  Quiet and steady in her resolve one minute and bounding around the stage with raw emotions on display in the next, I believed almost every minute of her performance.  As the lone male on stage, Jake Schwartz shows some impressive skill as Joe, the effete young man who grows up to be someone no one was expecting.  His large, piercing eyes nail his colleagues on stage, as well as the audience’s attention.  And Laura Weeldreyer is a great big Texas hoot as Stella Mae.  Karen Starliper, Katelyn Thayer and Sarah Jones round out the cast and all three are well suited to their parts.

“Come Back to the Five and Dime Jimmy Dean, Jimmy Dean” is one of my favorite movies and I was more than a little nervous about how I would feel seeing it live on stage, with local actors portraying characters I knew only from the film.  This production did not disappoint.  It’s a perfect little glimpse into the lives of some people who will remind lots of us of someone we know. Let’s just hope the folks we know don’t have such deep dark secrets and if they do, we don’t have to know about them. Cockpit In Court is close enough, thank you very much.