Theatre Review: ‘Damned if You Do’ by Upright Citizens Brigade at Woolly Mammoth 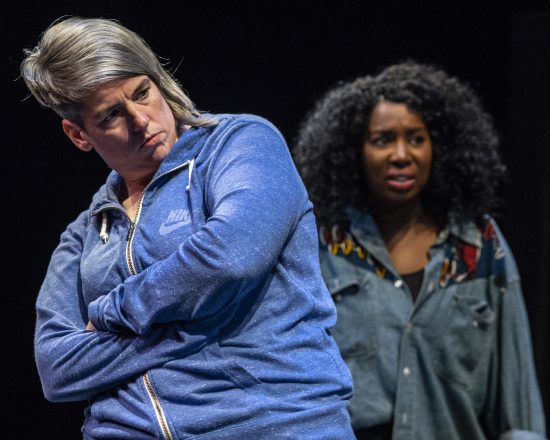 Surprise, spontaneity, and hilarity ensue anytime the Upright Citizens Brigade (UCB) is in the house. The New York-based improv troupe known for igniting the careers of famous comedians including Amy Poehler, Aziz Ansari, Ellie Kemper, Bobby Moynihan and many more just launched the 2018-2019 theatre season at Woolly Mammoth with “Damned If You Do.” Yay!

The UCB performances are always creative, collaborative, uninhibited and off the cuff…

Following the long form style of improv where scenes are created on the spot, UCB’s “Damned If You Do” features a cast of five smart, talented and wickedly funny actors: Alex Dickson, Monique Moses, Shannon O’ Neill, Connor Ratliff and Molly Thomas. While each show is different and entirely dependent on the details the actors glean from random people they select in the audience, the UCB performances are always creative, collaborative, uninhibited and off the cuff.

The evening I attended, the UCB bunch had plenty of material to work with thanks to a neuroscientist, tech guy, and a creative director from an art college sharing colorful tidbits about their private lives. In the end, they focused on flashbacks and the future of only one person, the creative director from Iowa who won a reggae dance contest as a teen and who considers serial dating a hobby.

It is amazing to watch what the UCB actors do after learning all the juicy details about someone’s life during a talk show style interview with the said subject, we’ll call her “Amy.” What follows is pure, unscripted delight and incredible attention to detail as Moses, O’Neill, Ratliff and Thomas (Dickson was not present for this production) show they are super quick studies, turning out a series of outrageous vignettes and characters while weaving in everything they learned shortly before. So with playful precision and a little poking fun, the UCB presented a series of memorable moments from Amy’s life ranging from yoga class to a family vacation, work meetings and dates with a detective–all of which were unforgettable and hilarious.

However, any recap doesn’t do UCB justice because each performance is different, and you really need to be there in person to experience every second of joy that happens on that stage. So when you have the chance, catch them next time they’re in DC or go see them in New York. Totally worth it!

In the meantime, save the date for “Gloria” opening at Woolly Mammoth on September 3, 2018.

“Damned If You Do” performed by Upright Citizens Brigade Theatre runs through July 29, 2018, at Woolly Mammoth Theatre Company. For information and tickets to upcoming productions, call 202-393-3939 or visit here.