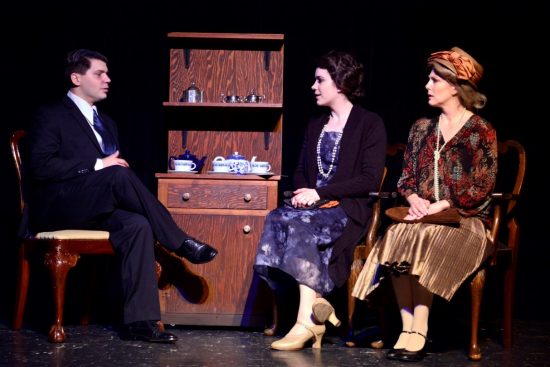 Matthew Barber’s “Enchanted April” is a play for anyone who ever considered making a break for it and leaving it all behind, at least temporarily, in the hopes of transforming a stale life into something meaningful again.

The story begins in post-World War I England, when the irrepressible Lotty Wilton (Madeline Byrd) spots a newspaper notice advertising an Italian castle for rent and becomes convinced that a month in the castle is just the thing she and her new acquaintance, Rose Arnott (Melissa Dunlap) need to escape their dull lives and lackluster marriages.

…escape to Aldersgate for an evening get-away of fun, laughter, and perhaps even a touch of enchantment.

While Lotty plots, Rose attempts to resist her scheming, insisting they can’t just up and leave their husbands for Lotty’s Italian fantasy.  However, Lotty pushes ahead, finding two other women, the glamorous and aloof Lady Caroline Bramble (Alexandra Guyker) and the elderly and inflexible Mrs. Graves (Eleanore Tapscott), to share the cost, and convinces Rose to get on the train.

Lotty and Rose arrive in Italy to find Lady Caroline and Mrs. Graves (Eleanore Tapscott) happily ensconced in the castle, along with an Italian maid, Costanza (Anne Hilleary), who is alternately annoyed and amused by the women’s antics.  As the story unfolds, the women are joined by the castle’s owner, Antony Wilding (Nic Barta), a charming veteran who seeks solace from the trauma of war in his family’s castle and in his art, followed by Rose and Lotty’s self-involved husbands, who provide the audience with a generous amount of comic relief.

In the end, although the four women are wildly different people, and the husbands largely clueless, each character finds comfort, healing, and renewed purpose in the bonds of friendship that form in an Italian castle during a truly enchanted April.

The play is rich with symbolism.  Act I takes place on a sparse set, accompanied by the sound of pouring rain that serves as a constant reminder of the women’s dreary, uninspired lives, and their desperate need to make a change.  Act II opens in the bright Italian sun with a beautiful set (designed by Charles Dragonette) that is such a dramatic contrast to rainy England, the audience actually broke into applause at the sight of it.

A superb cast, under the direction of Marzanne Claiborne, brings the quirky characters to life.  Madeline Byrd captures Lotty’s excessive positivity, while Richard Isaacs excels in the role of Lotty’s husband, the pompous solicitor, Mellersh Wilton.  Alexandra Guyker (Lady Caroline Bramble) shares her lovely voice with the audience in the play’s only musical moment and manages to make Lady Caroline a sympathetic figure, even amidst her boredom and disillusionment.

Rose Arnott’s (Melissa Dunlap) fear and trepidation provides the perfect counterpoint to Lotty’s persistence and Joel Durgavich, as Rose’s mischievous husband, brings humor and suspense to the proceedings when he makes a surprise visit to Italy.

The most satisfying comedy of the evening is provided by Eleanore Tapscott (Mrs. Graves), Nic Barta (Antony Wilding), and Anne Hilleary (Costanza), each of whom demonstrates comic timing and a sense of the absurdity taking place around them that keep the story light and the audience in stitches.

Even if you don’t have the chance to escape to Italy this summer, you do have the opportunity to escape to Aldersgate for an evening get-away of fun, laughter, and perhaps even a touch of enchantment.

Running Time:  Approximately 2 hours and 15 minutes with a 15-minute intermission.