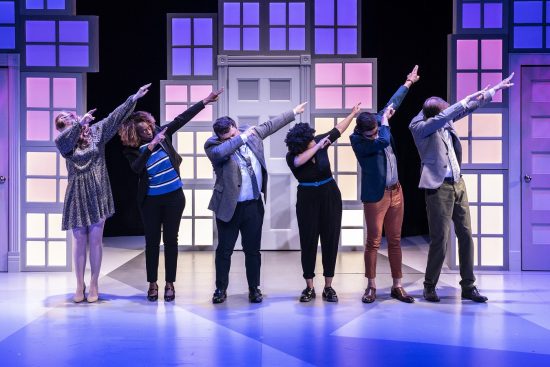 The Kennedy Center is abuzz lately with the juggernaut musical about a certain former DC resident, but it’s not the only game at the iconic theater complex. The Second City has done it again with a hilarious and timely romp, “The Generation Gap, or How Many Millennials Does it Take to Teach a Baby Boomer to Text Generation X?,” now playing in the Theater Lab.

For those not familiar with The Second City, they have been performing improv-based sketch comedy for over 50 years. They have permanent residency shows in Chicago, Toronto, and Hollywood and they also perform shows all across the United States. Some of their alumni have gone on to rise to the top of Hollywood’s comedy scene: Tina Fey, Bill Murray, Amy Poehler, Steve Carell, Martin Short, and Steven Colbert are just a few notables.

…I’d check out The Second City’s “Generation Gap.” It has something for everyone – literally.

The show is largely made up of interconnected skits that address the sometimes wrought attempts that different generations make to communicate, build relationships across divides, and, hopefully, find common ground. These skits varied in length and tone, but all kept to the generational theme. The cast consisted of 6 people, three men and three women, of varying ages. They each took on a number of roles and parts throughout the performance, making interesting points along the way, in addition to the abundance of laughs. There was also some singing, and a hilarious take on rapping that occurred early in the show.

Three of the funniest moments of the evening contained one of the most defining aspects of The Second City’s specific brand of comedy – improv. The Second City is famous for taking audience suggestions and making up comedy on the spot, and this show was no exception. One sketch’s premise was that we were 50 years in the future, at a Smithsonian exhibit about the year 2018. They asked the audience for a popular tv show, and selected the suggestion of “Game of Thrones.” One of the amazing things about live theatre is that you can’t predict what might happen. One of the performers mentioned a “Red Winter,” combining two of the more well-known references from the show. While the GoT fans, both onstage and off, broke out in laughter, the actress laughingly confessed that she didn’t really watch the show. This was a moment that the cast also made some callbacks to throughout the rest of the show, again showing their comedic dexterity and lightning fast wit. The other two skits were mini “episodes” of a game-show called “Mind the Generation Gap.” The actors asked for a volunteer, first born in the year 2000 or later, then from 1970 or earlier. They then put the contestant through several different tasks designed to trip up someone from their generation. I won’t spoil the tasks here, but suffice it to say that they definitely devised challenging tasks for both demographics.

The cast was also incredibly talented; each person had excellent comic timing, and it was clear that while they were very skilled performers, they were also having a ball. Asia Martin, who was not only a performer but also the creator and writer of this piece, was a particular standout with her performance in a skit confronting toxic masculinity. She should be commended for creating this humorous and thought-provoking piece of theatre, in addition to delivering a nuanced performance. Frank Caetic inspired gut-busting laughs; a particular favorite of this reviewer was his performance of a personified version of the three dots that appear as you wait for someone to complete a text message. Cody Dove delivered a deluge of side-splitting dad jokes and did a charming and funny sketch with Maureen Boughey as a burgeoning couple. This sketch was referenced again toward the end of the show in a different way, with a particularly poignant performance from Boughey. Holly Walker and Evan Mills also delivered strong performances, especially in a skit they do together about a grandson teaching his grandmother to tweet, and then being devastated when Beyonce follows his grandma before she follows him.

The set was also impressive, as you can see in the photo. They did three doors, seemingly one for each generation, and surrounded them by LED lighted blocks. The rest of the stage was bare, and they used some portable props and movable set pieces to transform the stage from scene to scene (Scenic Design by Bob Knuth.) The wardrobe was also well executed; the performers stayed in the same costumes for most of the show, with some slight additions, which allowed them to move seamlessly through the different vignettes of the show. (Wardrobe Stylist, Jessi Sheehan.) The lighting was impeccable, which was particularly important since this is a sketch show and the lighting changes are what sets the beats between scenes (Lighting Design by Mary Keegan.) One of the highlights of the show was the original songs performed by the cast, which were funny, truthful, and extremely entertaining; kudos to Julie B. Nichols for her original music. Finally, Anthony LeBlanc should be commended for helming such a cohesive and relevant show.

So if you can’t get tickets to “Hamilton,” or even if you can, I’d check out The Second City’s “Generation Gap.” It has something for everyone – literally.

Running Time:  Approximately 90 minutes and there is one 15 minute intermission.

Advisory: Due to some adult language and situations, the show is recommended for audiences 16 and above.