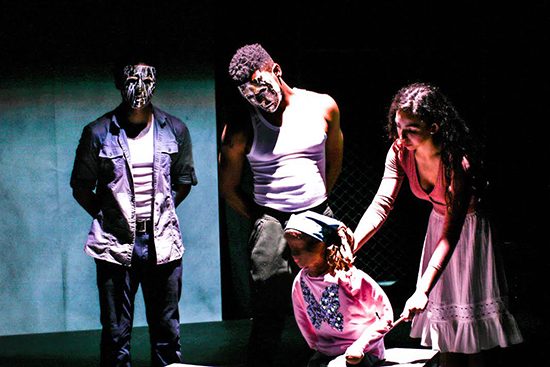 “A New Nation,” part of the Guerrilla Theatre Works series by Convergence Theatre, begins softly with the four performers singing a song with the refrain “Mother of Exiles,” a lyric taken from “The New Colossus,” the welcoming poem inscribed on the Statue of Liberty. What follows is a vital, vibrant examination of the immigrant story and an unforgettable evening of theatre.

… a vital, vibrant examination of the immigrant story, and an unforgettable evening of theatre.

Directed by Natalia Gleason-Nagy and Elena Velasco, the performance is a sequence of 15 vignettes, each of which examines a different part of immigration, and the immigrant experience in the United States, through monologue, narrative and sometimes wordless storytelling. The incredibly strong performers effortlessly maneuver the different emotional pitches during a show that examines privilege, intolerance and the strength of family.

One of the major through-lines of the show is that of the mother and caretaker. In “Au Pair” a young woman, an au pair, (Karoline Troger) speaks to a mostly unseen employer, apologizing, promising not to speak another language to the child she cares for. Troger does an excellent job portraying the woman’s frustration, seething with anger by the end. “I’m so sorry to take up space,” she spits. “I’m so desperately 3-dimensional.”

In perhaps the most haunting vignette, “Raid,” a woman (Fabiolla da Silva) sits with her children as military-type men march around her, taping off the area. Imprisoned, she fights for her children, who are taken from her and placed in trash bags like confiscated items. It’s a painfully effective sequence that draws a direct line to family separation and the devaluation of human life.

The male performers of the show carry some excellent monologues that also interrogate the meaning of home and heritage. In “I Dream in Color” a man (Sebastian Leighton) questions what being an immigrant means for him. “What is the immigrant story to the black man?” he asks the audience. “Can I dream in color?” In the lyrical monologue, “My Father’s Skin,” another man (Cristian Camilo Linares) talks about pulling and peeling the layers of himself back, to perhaps find his father and himself.

While the stories range from narrative to allegorical, all feel fundamentally authentic and lived-in thanks to the fact that many of the performers themselves wrote the scenes. Short news clips often introduce the segments, highlighting overarching intolerance and suspicion of migrant and immigrant communities. “They weren’t born here, they’re not assimilating,” says one interviewee in a clip. The vignette following a video often pushes against these ideas; at times actors speak directly over the video’s soundtrack, suggesting a direct counter-narrative to anti-immigration vitriol.

The intimate space works well with the material, immersing the audience in the action and amplifying the urgency and emotion of many of the sequences. The performance is also supported by fantastic production values, including P. Precious Porter’s versatile lighting design and Drew Weinstein’s excellent sound design, which often features the low, menacing hum of TV static. Bria Gilbert’s simple costuming allows for easy narrative transitions across the vignettes.

After the conclusion of the show, audience members were encouraged to speak to someone they didn’t know and share their own immigrant story. Convergence Theatre’s dedication to creating space for these stories, and extending them into the community, demonstrates the possibility of creating a new conversation, and a new nation.

“A New Nation,” part of the Guerilla Theatre Works series at Convergence Theatre, performed at the Anacostia Arts Center, runs through July 29. Some performances include opportunities for post-performance engagement with audience members, and others will feature the “Converging Minds” speaker series, which focuses on community engagement. For tickets or more information, click here.