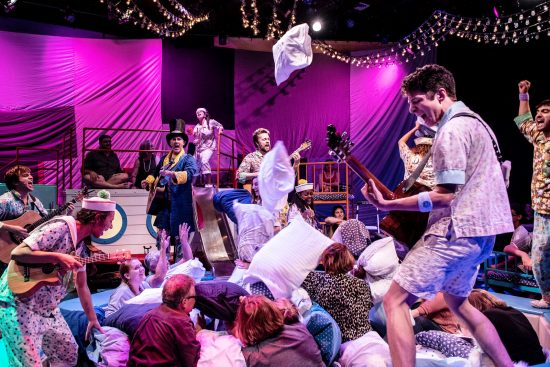 Patrons entering the Mulitz-Gudelsky Theatre Lab at Olney Theatre Center expecting to see a traditional set specifically designed for Gilbert and Sullivan’s “H.M.S. Pinafore” will be quite stunned.  There’s no facsimile of a saucy ship’s a beauty, no ostensible scenery depicting the ocean blue, and the sober men and true sailors are not attired in stylish 19th century British Navy uniforms.

Instead, you will walk into the lab that is part playground, part carnival, part slumber party.  In this set, imaginatively designed by Tom Burch, the 10 performers are already strolling about in bright colorful pajamas and some crazy slippers, all creatively designed by Alison Siple, playing an assortment of stringed instruments and serenading the folks with seemingly random songs as the crowd files in.

Small stuffed animals are tossed by the actors to the unsuspecting and eventually suspecting patrons during the hubbub.  Some are encouraged to sit in a large decagon-shaped box in the center of the stage that resembles an above ground swimming pool. But rather than water, the contents feature a whole bunch of pillows.  Kids jump into this box, and unprompted, begin having pillow fights with what appears to be their parents, siblings and other occupants.

On an elevated platform, which has what appears to be the painting of two portholes—among the very few direct references to a ship on this set—there is a slide for audience members as well as some of the actors to utilize as it empties into the pillow-laden box.

Continuing the peculiarities there is a refrigerator with a sign saying “No Swear Words,” several more beds, a bar (yes, they’re selling libations during the show) and other goodies in a canopied concession stand in a corner of the stage.

Rules are announced and audience members are invited to sit in the “promenade” area that includes the floor, benches and the aforementioned set pieces. The actors alert the audience seated or standing in these areas by hand signals or gentle touches on the shoulders for them to move to another location as the performers will be occupying that given space.  All this transpires throughout the 70-minute show adding to the desired commotion.

There are heaps of laughs, lots of high jinks, and tons of talent on display is this spoof of a Gilbert and Sullivan classic.

As if you couldn’t tell by now, this is clearly a satirical rendering of the popular “H.M.S. Pinafore.”  The jaunty music was composed by Arthur Sullivan and the book by W. S. Gilbert. It is one of their Savoy operas that also include “The Mikado” and “The Pirates of Penzance”—the latter being performed in repertory at Olney in association with The Hypocrites and The House Theatre of Chicago.

Directed and adapted by Sean Graney and co-adapted by Andra Velis Simon and Matt Kahler, the production is chock full of talent, high energy and playfulness that offer the audience, even for just these 70 minutes, a welcome respite from the world’s events.

Though the aesthetics are non-traditional to this 19th century work, the production stays true to the storyline as well as the sparkling musical numbers including the familiar ones: “We Sail The Ocean Blue,” “I’m Called Little Buttercup,”  “I Am The Captain Of The Pinafore,” “Kind Captain, I’ve Important Information,” and “Now Give Three Cheers.”

The performers, who are members of the Chicago-based The Hippocrites, have taken their repertories around the country. They play the stringed instruments while they sing, act and bandy about the stage.  Those instruments include a good dose of guitars, as well as a ukulele, mandolin, fiddle, accordion, and brief appearances by a flute and a toy piano.

Aside from the unconventional set and prelude to the show, one immediately recognizes where this was heading as the rather burly bearded actor Matt Kahler ironically sings the show’s second number, “I’m Called Little Buttercup.”

What was a male role in the original work is now a female role for this production and vice versa.  It’s not cross-gender acting in which males are playing female roles but the genders of the characters are reversed. For example, the character Josephine, the daughter of Captain Corcoran in the original version, is now Joseph and is played superbly by the charismatic and talented Mario Aivazian. Captain Cat, a female character in this show, is played commandingly by Tina Muñoz Pandya.

In keeping with the original, the comical tale depicts the power of love against the backdrop of class snobbery. Joseph, Captain Cat’s son, falls for lowly sailor Ralphina Rackstraw (Dana Salem Omar) but he is duty bound to marry the snooty Admiral Dame Jo-Ann instead (Lauren Vogel). A twist at the end puts an exclamation point on this mayhem.

The entire cast sings exceptionally well with an abundance of movement around the stage while playing their instruments. Ms. Omar’s and Mr. Aivazian’s vocals are particularly outstanding in their solos.

Rounding out The Hypocrites are Shawn Pfautsch as Heebies, Eduardo Xavier Curley Carrillo as Kev’n, Steven Romero Schaeffer as Kinfolk, Leslie Ann Sheppard as Tiffini and Aja Wiltshire as the “stinky” Dot Deadeye.

There are heaps of laughs, lots of high jinks, and tons of talent on display is this spoof of a Gilbert and Sullivan classic.

It’s impossible to speculate if those men would be turning in their graves if they were to see this parody of their work. But I can say with a degree of certainty they would be laughing and having a good time.  So will you.

Give three cheers and one cheer more to Olney’s bright and zany ‘Pinafore’.

Running time. Seventy minutes with a one minute intermission.