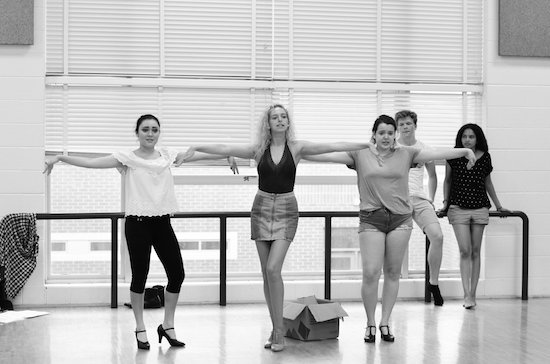 The overexaggerated cliché “it’s to die for,” receives an extreme makeover in Wildwood Summer Theatre’s rendition of “Heathers The Musical.” The Heathers, a group of popular girls all named Heather, certainly earn the nickname, “The Lipstick Gestapo,” in the wildly shocking, yet stylishly witty, dark satire.

“Heathers The Musical” is yet another cult classic film reanimated by the ambitious Laurence O’Keefe and Kevin Murphy to grab a modern audience’s attention. Based on a film from 1989 of the same name, our story starts in the halls of Westerburg High School with the scrappy Veronica Sawyer (Becca Glatt) attempting to maneuver her way through the pecking order established by the notoriously nasty Heather Chandler (Julie O’Hara), Heather McNamara (Olivia Speck), and Heather Duke (Alexis Leder).

Veronica weasels her way into the Heathers’ clique and descends into the embrace of adolescent evil, secretly betraying her plain, but loyal friend Martha (Mercedes Blankenship). The “Big Fun” begins when the sexy, but sinister J.D. (Jehan Silva) flirts with Veronica. Unfortunately, Westerburg High School is NOT in for “Big Fun,” as multiple students mysteriously commit suicide and empathy is just as mysteriously missing.

Wildwood Summer Theatre’s most impressive feat was grappling with the content of the musical. With teen suicide, sexual abuse, school massacres, poor parenting, and constant bullying, it’s a wonder that the audience could laugh at the dark comedy that the script sharply delivers.

Silva (J.D.) and Glatt (Veronica) effectively guided the audience through the murky waters of humor and horror. Particularly poignant was their duet, “Our Love is God,” a love song poisoned with deceit. Earlier in the show, Glatt gave the audience a pleasant taste of her vocal and acting prowess with the ballad “Fight For Me.” The Ensemble enjoyed their time on stage during the party scene, “Big Fun.” A highlight was a male ensemble member with harem pants and a ‘Riot’ t-shirt who was well…a riot! The choreography was minimal and cyclical to avoid distracting a viewer from the dialogue during a busy scene. The Heathers indulged in some light voguing, which was a welcoming aspect to their personality.

O’Hara interpreted Heather Chandler accurately with looks of revulsion and smugness glittering across her face. Alexis Leder (Heather Duke) graced the stage with natural and believable poise. Olivia Speck demonstrated a strong command of character dynamics with her interpretation of the shrewd, but malleable Heather McNamara, especially with her soft and vulnerable expressions in the heartbreaking “Lifeboat.” Combined, O’Hara, Leder, and Speck make one retro group of devilishly mean girls.

Aryn Geier (Ms. Fleming) sang the surprising showstopper, “Shine a Light,” which was an audience favorite. Geier’s interpretation of a frantic, self-important teacher landed nicely, which spotlighted her as a strong actor within the company. Daniel Lamond and Alex Adah as the bullies’ fathers hinted at a deeper relationship earlier in the show that certainly would make for a good chuckle in the second act. It’s a shame that Martha (Mercedes Blankenship) did not have more stage time, as she was the only character with a pure heart, which sadly is stomped on by the demonic-like teenage caricatures of the show.

The static set appeared like a coloring book page of a dollhouse, with linear lines carving out different levels for the actors to use. At times, small additions like a 7/11 sign were tacked onto the set to differentiate settings. The lighting designer (Spencer Morgan) enjoyed using shades reminiscent of watercolors to paint the stage. Shadows often crept over the actors’ faces, which lent themselves to the themes of the musical.

Kathryn Bailey, the music director and conductor, should take a deep bow for her work with the difficult vocals and pit band. The synth player artfully adjusted the dynamics of the ominous minor chords to complement the actors’ work on stage. Despite the depressing script, the score is a delight to satisfy any cravings for a rock musical and the pit orchestra masterfully paid respect to the composers.

As a warning, the villain of “Heathers” hisses, “it’s a dangerous world.” But what’s the point of living if we can’t laugh a little at the insanity?

Running Time: About 2 hours with one 15-minute intermission.

“Heathers The Musical” plays through July 21st at the Walter Johnson High School Auditorium in Bethesda. For tickets or more information, click here.