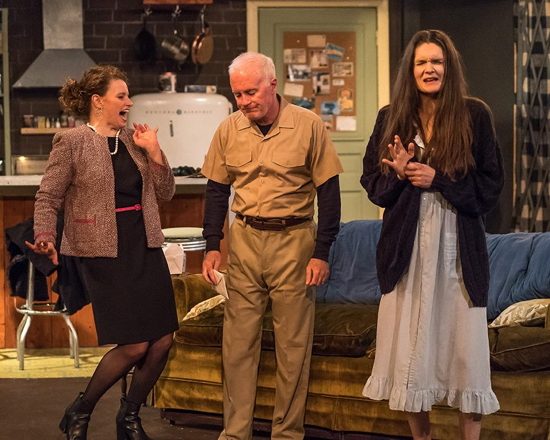 This dark comedy is fast-paced and musical. You’ll laugh but you’ll also leave thinking and hopefully be talking about bigger issues.

Artie and his girlfriend Bunny want to run away to California together and leave Bananas in a hospital. Ronnie was just drafted to fight in Vietnam, which everyone believes is simply a gang war that will blow over soon. Except for the pope, who makes a special trip from Italy to New York to address the United Nations. What ensues is a sordid, dark comedy about what people want and what they are willing to do, or not, to get it.

Gary Sullivan plays Artie. He is a strong actor, and singer, who brings vibrant energy and weary frustration to the role. Maura Suilebhan’s Bananas is a hauntingly strong yet innocently delicate creature. Annette Kalicki brings a flighty, rambunctious spirit to the stage as Bunny.

The set designed by Leigh K. Rawls dynamically created a messy Queens apartment. It was truly full of clutter and felt stifling. Artie and Bananas both wore pretty drab outfits while Bunny and the others were dressed in nicer 1960s era clothes and bright colors. Costume designer Kristyn Lue did well to distinguish relationships based on costumes.

The use of the television on stage is interesting. There are moments throughout where the action freezes and a character steps out to speak directly to the audience. When this happens the TV is the thing providing the light and they seem transfixed by it.  Lighting designer James Robinson did well to bring us into their world.

This play definitely reflects the era in which it was written but there is one thing that feels eerily relevant to some current hot topics. Ronnie, played by Berns, is a young man of privilege who feels like a dramatic, violent event is the thing to earn him some attention. He runs away from the army and makes his decision with little consequences to himself, but they have a huge impact on those around him.

This dark comedy is fast-paced and musical. You’ll laugh but you’ll also leave thinking and hopefully be talking about bigger issues.

“The House of Blue Leaves” runs at Silver Spring Stage through August 4. For tickets and more information click here.