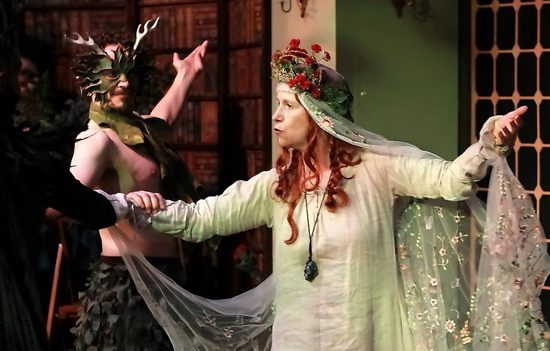 Coincidence is nothing more than mystery and magic playing a game with the lives of its clueless pawns. In Quotidian Theatre Company’s “An Irish Twist on A Midsummer Night’s Dream,” it appears as though the company reached for Shakespeare’s classic on a dusty bookshelf and a tome of Irish Folklore came with it, spilling onto the floor and blooming into a new interpretation of the comedy.

This adaptation and interpretation of “A Midsummer Night’s Dream” stays true to most of the original text and even the famed meter of Shakespeare. Set in 1817 in Tuam, Galway, Ireland, directors and adapters Stephanie Mumford and Leah Mazade formulated an interesting backstory about a family named ‘Montbrook’ to explain the current situation of the Irish lovers, which fortunately can be found in the program to theatergoers who may not be familiar with “A Midsummer Night’s Dream.” Aveline (the equivalent of the Helena character) pines after a Lord Gregory (Demetrius character), while Margaret (Hermia character) shirks her mother’s marriage wishes, Lady Montbrook (Aegus character), and she runs off with her tutor, Liam O’Conor (Lysander character). Lady Montbrook’s servants are the bumbling Mechanicals, whose names such as Bottom and Peter Quince are preserved in this adaptation. Meanwhile, the Irish version of the Fairy King and Queen, Finvarra and Oonagh respectively, spar over an adopted child, in which a begrudged Finvarra sets the mischievous Puck on a mission to humiliate his wife. All parties begin to converge in the forest as Puck shoots the pollen of the arcane flower into eyes of the unexpecting visitors. But much to Puck’s and especially Finvarra’s dismay, matchmaking doesn’t quite go the way they intended.

Each of the primary acting ensembles, the Fairies, the Servants, and the Lovers, were anchored with a strong performer that brought out the best in all the other actors, which culminated in a spectacularly woven narrative.

Artful visuals, strong acting, pleasant tunes, and hearty laughter are all waiting to be found somewhere deep within woods of Galway in ‘An Irish Twist on A Midsummer Night’s Dream.’

Ian Blackwell Rogers (Puck) seduced not only the characters on stage, but most certainly the audience. Rogers used his array of physicalities with a delightful intensity and graceful poise that lured viewers into his spell-binding performance. Even though Rogers had multiple components to his Satyr-inspired costume and a large portion of his face was hidden under a well-crafted leather mask, this did not hinder his performance; it highlighted his expertise.  Angela Kay Pirko (Aveline) and Laura Rocklyn (Margaret) created a believable sisterly dynamic, with all ranges of a complex sororal relationship seen within the timeline of the play. Pirko brought a smartness to Aveline, which complimented the simple beauty of her character’s look. Of course, David Dubov’s blundering Bottom has to be mentioned as a standout. It would be assinine not to have a smile on your face as Dubov sauntered around the stage, reminding us of at least one person we know that has a big-head filled with an inexhaustible amount of hot air. Bubov was the final and necessary ingredient to make sure viewers departed with a grin on his or her face.

The mock performance of the play within “Midsummer,” “Pyramus and Thisbe,” could stand alone as a hilarious one-act. Dubov as Bottom played Pyramus and John Decker (Reverend Peter Quince) played a woebegone Thisbe. There’s nothing quite like seeing a reverend kissing a masked man through the fingers of yet another man playing a Wall (John Allnut), which left viewers in fits of giggles and guffaws. Mrs. Starvling (Leah Mazade) floated around the miniature stage as the Moon rather aimlessly and took a premature bow, when the Lovers interjected a joyful accolade, adding yet another comedic layer to an already successful show.

To accent the Irish flair, the creative team embedded choreography and music into the fabric of the play. Peter Brice’s compositions and music direction created a warm atmosphere with mostly just fiddle and accordion, sometimes distracting from the dialogue, but still adhering to the thematic premise. Irish dancing (choreographed by Kate Bole) gilded some of the transitions and storyline. The entire set was static and visible during the course of the story. It felt as though the audience had simply walked into a cozy mansion library and watched the action unfold. The natural greens varying in emeralds and moss found in pillows, curtains, and costumes contributed to a naturalistic feeling of the forest, yet the grand estate intrusively hovered over the mystical element that “Midsummer” needs. Besides excelling at intricately blocked tableaus, Stephanie Mumford’s thoughtful costume design was breathtaking. The colors, the details, and the accents in the costumes blended incredibly well.

An encounter with Quotidian’s production is more than just luck. Artful visuals, strong acting, pleasant tunes, and hearty laughter are all waiting to be found somewhere deep within woods of Galway in “An Irish Twist on A Midsummer Night’s Dream.”

Running Time: 2 hours and 15-minutes with a 15-minute intermission.

“An Irish Twist on A Midsummer Night’s Dream” plays through August 12th at the Randolph Road Theater in Silver Spring. For tickets or more information, click here.