Theatre Review: ‘James and the Giant Peach’ by Heritage Players 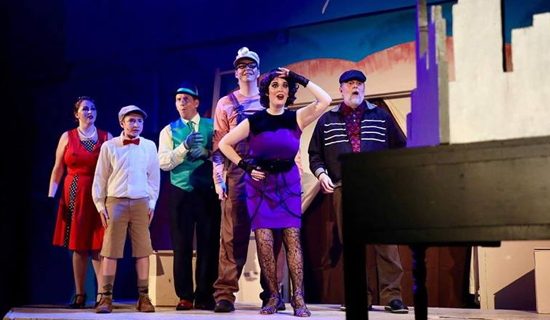 The Heritage Players’ musical production of Roald Dahl’s “James and the Giant Peach,” directed by Elizabeth Tane Kanner, is a tale of an accidental adventure involving an orphan, large critters and one enormous peach. This wondrous story centers around a young boy, James (played by Brandon Goldman), whose misfortune of losing his parents to a man-eating rhinoceros destines him to live with his two aunts, Spiker (Ashley Gerhardt) and Sponge (Amy E. Haynes). Their constant chastising of the boy perpetuates a series of magical events, setting the stage for some surprising comradery.

From the onset of this story, which begins in an orphanage, James finds himself alone with only two insect friends, a grasshopper (Jeremy Goldman) and a ladybug (Rebecca Hanauer), before quickly being sent to live with his dreadful aunts. He is immediately put to do chores, such as chop down a fruitless peach tree housing bugs of all sorts. However, James is enticed by an enigmatic stranger, Ladahlord (Stephen M. Deininger), to mix a magical concoction, shake it up, and drink it. Instead, he accidentally spills the elixir at the base of the peach tree, evidently exposing some creepy crawlies in the process.

The actors performed their roles with enthusiasm, splendid choreography, and superb vocals.

This production does an outstanding job of illustrating how, in spite of a myriad of human flaws, the world can find kindness and understanding among some of the most unlikely creatures. The stars of this production are undoubtedly the impressive cast. The actors, as a collective, create an imaginative atmosphere on a rather rustic platform. The sound system was adequate and the set was very organic in design (crafted by the director Kanner and Atticus Copper Boidy), which was gingerly complemented with subtle lighting effects (lighting designer TJ Lukacsina).

I thought the Giant Peach itself was a creative prop given the limited space on stage. Costume designer Lisa Chicarella created outfits that were a notch above simple, and puppet designer, Meredith Tane, devised some frugal ways to involve hand puppets attached to real people without any cover.

Overall, the show was a family-friendly, artful, offbeat rendition of a fantastical and fun story. The swinging of highs and lows throughout this thematic adventure are satisfying because of the story’s touching message of learning the true meaning of family. James learns the value of maintaining hope in the face of insecurity and realizes friends can be all the family one needs.

This community theatre production entertained a room packed with parents and children on the final night of June with a modest, but creative set and lights that set the mood just right for complete captivation. The actors performed their roles with enthusiasm, splendid choreography (arranged by Malaria Zeeks), and superb vocals, which music directors Emily Taylor and Chris Pinder deserve praise for. Some notable performances deserving of highlights include Gerhardt and Haynes’s portrayal of the wicked aunts, Spiker and Sponge. The audience both laughed and sneered at these comedic villains, who in spite of being life-long scam artists, gripped everyone’s attention long before the giant peach ever dropped from the tree.

Deininger’s role as Ladahlord was immensely energetic and spellbinding, being both the narrator and a character in the story. Scheer’s role as the whiny Earthworm cracked some surprisingly funny lines, much to the audience’s delight. All in all, Heritage Players’ production of “James and the Giant Peach” is eccentric entertainment the whole family can enjoy. Director Elizabeth Tane Kanner did a phenomenal job of casting talented performers, guiding them to that classic nook of self-discovery and genuine humility, and linking all the characters with memorable songs and a robust technical team. There are still two weekends left of performances and there are few better ways to spend some quality time with the kids and family than catching one of these showings.

“James and the Giant Peach” is now playing at the Thomas Rice Auditorium in Catonsville through July 14th. For more information on times and tickets, click here.