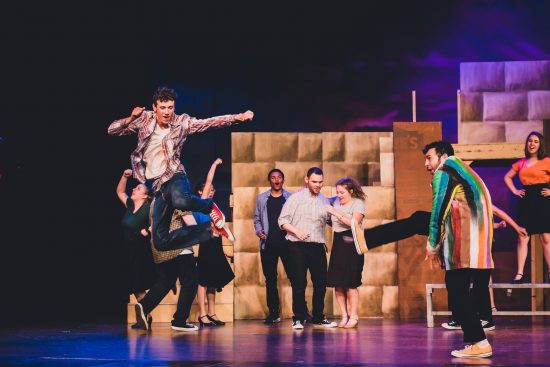 The Fredericktowne Players production of “Joseph and the Amazing Technicolor Dreamcoat” (co-directed and co-choreographed by Matt Kopp and Kendall Sigman) is currently playing (through July 22) at the JBK Theater on the campus of Frederick Community College in Frederick, Maryland. In the eyes of this reviewer, it is a very good production; in the perception of an enthusiastic audience already in love with this musical, it is likely to be viewed as an excellent production.

Much of the current popularity of the play is universal themes such as triumph in adversity dysfunctional family relationships. Yet the popularity also descends from hearing the story not in the sonorous prose of the Genesis narrative on which it is based (“I pray thee, let thy servant abide instead of the lad Benjamin”) but in catchy and witty tunes such as “Benjamin Calypso” (those same lines, now becoming in dynamic-equivalence translation “Sure as the tide wash the golden sand/ Benjamin is an innocent man/ Sure as bananas need the sun/ We are the criminal guilty ones”).

In the end, the Fredericktowne Players production is recommended for those new to ‘Joseph and the Amazing Technicolor Dreamcoat,’ but more especially to those who already love the Andrew Lloyd Webber-Tim Rice show, with its retelling of a thrilling biblical narrative and its variety of tunes representing various genres.

The well-known story in brief: A narrator sings the story of Joseph’s physical journey as well as personal odyssey from being an unwanted brother to an influential administrator in Ancient Egypt, second in power only to the Pharaoh, Joseph’s brothers are jealous of their father’s attention and favoritism towards Joseph, symbolized most visibly in the father Jacob’s gift to Joseph of a vibrant many-colored coat. The brothers’ envy causes them to eliminate their problematic brother by selling him into Egyptian slavery. When the brothers are in famine and meet the now powerful Joseph, will he respond with revenge or forgiveness?

The main narrator with singing duties taken on by Taylor Knapp is excellent in voice and personality for the role, and in an unusual choice, some lines are shared with a co-narrator (Stacy Carroll). Once the audience was used to the second narrator, this conceit provided comic relief in the interaction between the two. Some lines are sung in a different voice with a supplementary vocal texture.

Though she sang few lines, another singer who is in fine voice singing acapella is Amanda Berry as Joseph’s mother. The same can be said of Clay Comer in his energetic routine as a Vegas Elvis-style Pharaoh.

Joseph is in the person of Scott Hart, very young – reminding us that Joseph himself is in his teens as the story commences. Yet this actor handled Joseph’s authoritative scene as determined co-ruler of Egypt with aplomb. His sincere singing voice was pleasant as well as plaintive in “Close Every Door” and “Any Dream Will Do,” the two most melodic songs of the show.

The costume choices varied: Instead of biblical garb, Joseph’s brothers are dressed in jeans, t-shirts, and unbuttoned plaid shirts, much like in “High School Musical.” This differs from the costumes and time periods suggested by other characters and the Middle Eastern-style props (stone architecture and potted palm trees). The female chorus is dressed in black skirts with blouses, each blouse reflecting a different color in the rainbow. Joseph’s coat of many colors was at first disappointingly simple: just a short jacket sray-painted in strips of different colors. When the coat is presented at the end, it is transformed into a flowing robe of beautiful designs and colors, glittering and shiny in its lining. Would it be going too far to suggest that this longer, more spectacular coat represents “threads of development” of Joseph’s character we have witnessed in the play? The switch of coat styles provided food for thought.

The show “Joseph and his Technicolor Dreamcoat” runs less than ninety minutes, but this coterie of players performs an extended and spirited reprise of some of the main songs of the show, such as the country-western style “One More Angel in Heaven,” the French-inspired “Those Canaan Days,” and the aforementioned “Benjamin Calypso.” Indeed, the production “took off” most in the musical sense in its large chorus numbers and vivid choreography. And, even though the music was recorded, the balance between the vocals and instruments was good.

In the end, the Fredericktowne Players production is recommended for those new to “Joseph and the Amazing Technicolor Dreamcoat,” but more especially to those who already love the Andrew Lloyd Webber-Tim Rice show, with its retelling of a thrilling biblical narrative and its variety of tunes representing various genres.

The Fredericktowne Players’ production of “Joseph and the Amazing Technicolor Dreamcoat” runs through July 22nd at the Frederick Community College. For more information, click here.