Theatre Review: ‘Judy and The General’ at Spotlighters Theatre 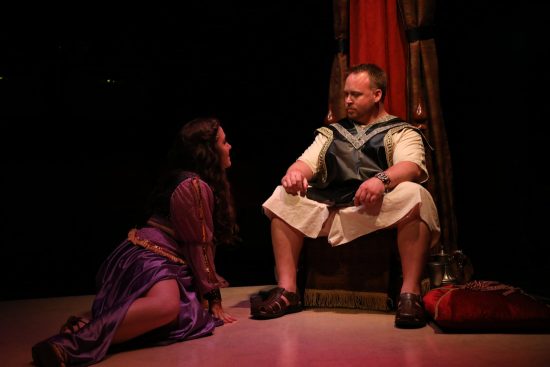 Rosemary Frisino Toohey is about as accomplished a playwright as we have living amongst us mere mortals.  Her first musical has found a world premiere at Spots, and while the production seems a little wet behind the ears in a few spots, it is overall a definite crowd pleaser, if the opening night audience’s reactions are any indication.  It is rare indeed to find a contemporary playwright who takes on a re-telling of a (mostly) biblical story, let alone set it to music.  But tell it Ms. Toohey does.

…it’s a swell night out and perfect for a summer evening’s entertainment.

Judith of Bethulia is a beautiful widow who has largely shut herself away on her large estate after the death of her husband.  Her hometown of Bethulia is running out of water and other provisions, because mean King Nebuchadnezzar has sent his general Holofernes to conquer pretty much the entire world and Israel, is next on the chopping block.  Back then that meant killing most anyone in the way, like the Jews. Well, our Judy is not going to stand idly by and just let that happen if she can help it, so she takes her trusty maid and sets off to woo the general. What Holofernes doesn’t know is that she is planning to get close enough to him to chop off his head, thereby putting an end to his dastardly march. Can I get an amen?

The production is ably directed by Michael Tan, who does triple duty as not only the director but musical director and pianist.  The stage and minimal set are given a fine treatment by Alan Zemla with an assist from Laura Nicholson.  Executive Producer Fuzz Roark also designed the appropriate lights, as well as assisting with the well-done costume designs in conjunction with Julia Golbey.

Several of the cast are do double duty in two or more parts.  Wayne Ivusich is hilarious as the King, as well as Judy’s father, a town elder in Bethulia and a soldier of Holofernes’ army.  He lends his pleasant tenor to several of the songs. I particularly enjoyed “Plunder, Pilage and Loot.“ Richard Greenslit shows great comedic timing as the king’s head servant, another town elder and a soldier.  His surprisingly robust baritone is well suited to the score, especially on “The Servants’ Lament.”

Rob Wall is always a welcome addition to a production and he doesn’t disappoint playing both the first husband and the villainous Holofernes.  His well-trained voice is spot on in every song, and he is every inch the general as Holofernes.  His low-key delivery is not the bluster one might expect from the role but it is very effective and fun to watch.

Kellie Podsednik is delightful as Judy.  While I wish the score set more comfortably in a little lower register for her, her crystal-clear soprano is lovely.  She is forthright and resolute in her depiction of Judith (Judy to her friends) and maintains her character throughout.  Standout vocal numbers are “Closer to My Heart” and “What Am I Feeling.”  And Kay-Megan Washington once again walks away with the show as the Maid (she’s the favorite actress I mentioned earlier.)  The Maid narrates the show, breaking that fourth wall in a comfy, familiar style that holds the plot together and moves it along.  Her full-bodied voice is strong and sure on tunes such as “A Tale to Tell” and “The Servants’ Lament.” She’s funny and brassy and this part is definitely in her wheelhouse.

“Judy and the General” is well-written and shows great promise from Rosemary Frisino Tohhey as a writer of musicals. While I think the overall production might do with a little more orchestration, a little judicious editing, and some of the songs might benefit from a little snappy choreography, in the meantime, it’s a swell night out and perfect for a summer evening’s entertainment.