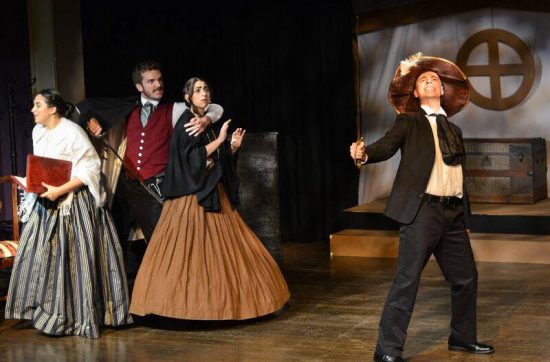 “Little Women,” like it’s literary counterpart, is a show that had always existed in my periphery. I’d heard a song or two at cabarets and auditions over the years, and I basically knew the plot, but it never seemed much like a show I would be particularly interested in seeing.

How wrong I was. Wildwood Summer Theatre’s production of “Little Women,” directed by Gavin Kramar, is a beautifully told story, and a testament to the strength of the bond between sisters. The story centers around the lives of the four young March sisters, Meg (Hannah Elliott), Jo (Emily Alvarado), Beth (Taylor Litofsky), and Amy (Alyssa Herman), as they grow from girls into adults over the course of several years.

All four actresses fit their roles perfectly; particularly notable are Herman, who is both hilarious and sympathetic as the self-centered Amy, and Alvarado, whose refreshing charisma and powerful vocals carry the show. Also of note was Ben Simon as Laurie Lawrence, the March sisters’ friend and neighbor. Simon’s performance was delightful, and his solo “Take a Chance on Me” was a highlight of the show. The cast was rounded out by Noah Beye as John Brooke, Josh Beede as Professor Bhaer, Emma Higgins as Marmee, Tatiana Varela as Aunt March, and David D’Ardenne as Mr. Lawrence.

Although the show’s story can at times be sappy, it never becomes overbearing or preachy. The more somber songs are evened out by a number of fun, uptempo numbers the whole family can enjoy, like “Five Forever,” a quintet sung by the four sisters and Laurie.

The set, designed by Sophie Mezebish, was effective in establishing the era of the show, while the costumes by Katie Cannon were gorgeous and well-suited to each character. The orchestra, led by music director Sam Weich, sounded excellent; especially noteworthy was the incidental music provided during various scenes, which was imperative in setting the mood.