Theatre Review: ‘People For Whom The World Spins and Turns’ by The Essential Theatre at Anacostia Playhouse 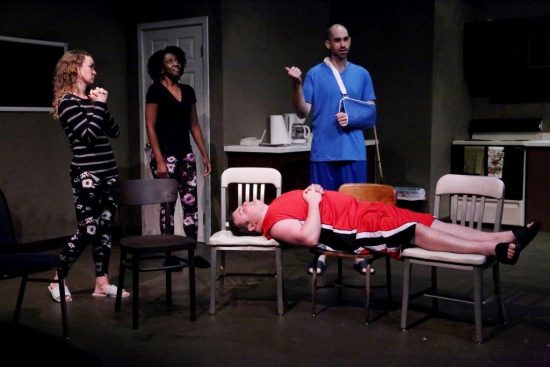 There were five people on the stage, and no more than a dozen in the audience in this intimate, 75-seat configuration at the Anacostia Playhouse, but it didn’t matter. “People For Whom The World Spins And Turns” is a blistering, not-pretty look at the consequences of addiction over the course of a 28-day stay in a remote treatment center. The physical consequences were not so important; it was the emotional, psychological and financial toll on the addicts and their families and friends that provided the tension.

This is not an easy show—it offers no easy answers or bromides, and you won’t leave feeling hopeful about the recovery rate for addicts—but it offers strong performances and a literate script that show us some real humanity in all its messy, glorious, sad tapestry.

Addicts lie. They lie to their families, their co-workers, their employers, their teachers, their friends, and themselves. They can’t not lie, because if they did not lie, they wouldn’t have survived as long as they had. The moment of life and death comes when they stop lying and have to face a reality that may never be as bearable to them as the drugs.

The four addicts who are in this treatment center skirt around and play with the truth, never trusting themselves or each other. Turns out the director, who is three years clean (or maybe five, who knows?) isn’t quite done with the lies either. Everybody is using everybody in some way because that’s what addicts do.

What doesn’t lie is this play. Written by James J. Hsiao, MD, it tells truths that a non-addict or someone who has never been in a residential treatment program would viscerally recognize or believe. Drugs let users hide from pain, boredom, broken dreams, the sense of not being enough in oneself, from systemic disparities in society that destroy hope before one knows what hope is. Unfortunately, one needs more and more to sustain the illusion of whatever cocoon they’re crawling into. How do you give up the only thing that lets you have some illusion of feeling alive?

This is a true ensemble cast and they do their work very well. The director of this rehab, Steve, played by Matthew Castleman, runs the daily group therapy program, but otherwise seems to let his clients figure out relationships and dealing with everyday stuff on their own. But Steve has secrets, and they are slowly revealed; he may not be actively using drugs, but he still has the behaviors of an addict. It’s a bravura performance.

The rest of the cast includes Ayesha Gowie as Cheryl (addict trying to get clean to get her four-year-old child back); James J. Johnson as Daryl (an older man—perhaps his 40s?—who is back for his 7th try); Kevin Boudreau as Ron (lawyer desperately trying to save his career and lifestyle); and Elle Marie Sullivan as Haley (college senior forced there by her father).

Their performances rely on the group dynamic of people who would not normally ever meet having to live together and they are skilled at using this dynamic to reveal complex human beings who are mostly unlikeable—they are manipulative, whiny, distrustful, lying, users. Yet each has a moment of grace that reveals a core of humanity that might—just might—be salvageable. They are fully human, and actually, more trustworthy than Steve. Bottom line, they’re not the ones holding out hope and betraying them in the end.

Kudos to the costume designer, Luqman Salim. Salim captured the look of rehab–everyone looks slightly disheveled and is wearing those ugly rubber or plastic shower-type shoes and the clothes are mere coverings for the body. When you’re in rehab, trying to make it to the next minute without drowning, what you look like is not a priority.

This is not an easy show—it doesn’t give easy answers or feel-good bromides, and you won’t leave feeling hopeful about the recovery rate for addicts—but it offers strong performances and a literate script that show us some real humanity in all its messy, glorious, sad tapestry. This was enough for a Sunday afternoon, and enough to spark some real conversations later.

Advisory: Adult language, drug references and sexual situations; not recommended for people under the age of 16.