Theatre Review: ‘Secrets of the Universe (And Other Songs)’ at The Hub Theatre 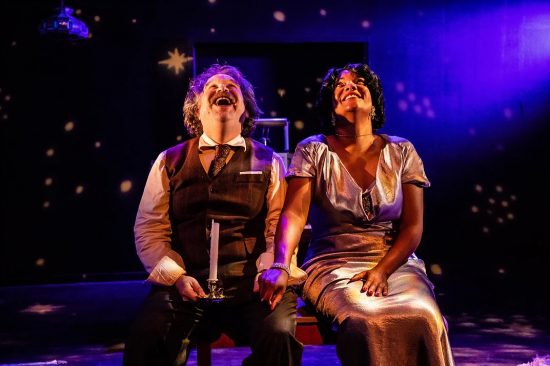 Sasha Olinick and Lolita Marie in Secrets of the Universe (And Other Songs). Photo by DJ Corey Photography.

It is rare to see a play that is so perfect that it becomes divine as it bestows gifts of transcendence upon its lucky audience, so I heartily encourage you to seek out “Secrets of the Universe (And Other Songs)” by Marc Acito, directed by Helen R. Murray, in its world premiere at The Hub Theatre, jointly presented by the Jewish Community Center of Northern Virginia.

You will be swept away into your own existential ponderings as you share the sweet and sometimes salty interactions between two stars flickering brightly against the dark night.

Who knew that world-renowned opera singer Marian Anderson and genius Albert Einstein were close friends throughout their lives? I certainly didn’t – and it seems that the rest of the world was equally unaware of their ties. In this stunning play, writer Marc Acito weaves the friendship of these two delightful people together in a script full of witty and whimsical banter laden with clever puns and jokes and punctuated by sharp confrontations as each great spirit challenges the other to see deeper truths about themselves and the universe.

Seamlessly integrated into the ongoing repartee are troubled visions, inner thoughts, and wondrous visions of relativity and the binding force of the cosmos. As the genius of sound and the genius of science banter and scold each other, they pick at the big question that haunts Einstein’s entire existence – what is the equation that unites order and chaos? How can both exist so harmoniously and yet so incongruously with each other?

Perhaps the answer lies in the relationship between Marian and Albert, who out of their flaws and contradictions and similarities and stark differences managed to create one of the most harmonious songs of the universe, a deep and true friendship which united them into a force of love that eclipsed their individual failings as human beings and bloomed with a light that sustained both of them through their deepest woes.

Lolita Marie as Marian Anderson and Sasha Olinick as Albert Einstein jointly deliver a luminous performance and are enchantingly supported by Brian Keith MacDonald, Mindy Shaw, and Jonathan Del Palmer who each fluently transition between several roles each. You will be drawn into the story before the play even begins with the lush set designed by Betsy Zuck and the costumes by Jane Fink are tailored to perfection and enhance each character’s personality. Lighting Designer Kristin Thompson propels us to a universe of whimsy and wonder throughout the evening – I loved the experience of being surrounded by starlight – and the sound design by Matthew R. Nielson both draws us deeper into reality when we hear vintage recordings of Marian’s singing and then adds to the surreal journeys that we sporadically accompany the characters on.

I highly recommend “Secrets of the Universe (And Other Songs)” at the Hub Theatre, directed by Helen R. Murray. You will be swept away into your own existential ponderings as you share the sweet and sometimes salty interactions between two stars flickering brightly against the dark night.

“Secrets of the Universe (And Other Songs)” plays through July 29, 2018, at the Hub Theatre. For more information, click here.