Theatre Review: ‘The Wonderful Wizard of Oz’ by Synetic Theater at the Davis Performing Arts Center 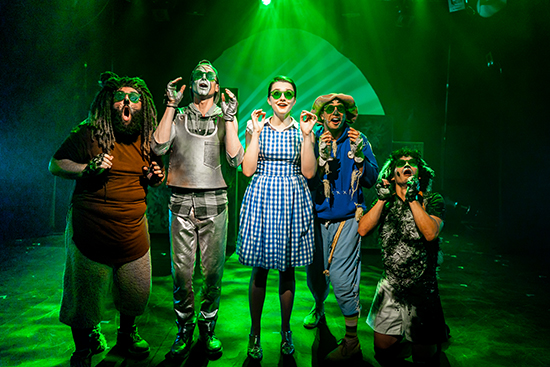 The cast of ‘The Wonderful Wizard of Oz.’ Photo by Brittany Diliberto.

Like many of the best children’s stories, “The Wonderful Wizard of Oz” is a journey of transformation through imagination. Synetic Theatre’s innovative new staging of the iconic tale is itself a refreshing transformation of a classic.

Director Ryan Sellers and choreographer Tori Bertocci share credit for adapting the show’s script from L. Frank Baum’s turn of the century novel, made into the iconic film, ‘The Wizard of Oz,’ in 1939. The story here also centers on Dorothy (Emily Whitworth), a fresh-faced and open-hearted Kansas girl who is unexpectedly and unwillingly transported to the magical land of Oz via cyclone, along with her trusty dog, Toto (Jacob Yeh). Accidentally executing the Wicked Witch of the East when her house lands, Dorothy is greeted as a liberator by the munchkins, the previously oppressed inhabitants. Desperate to return to Kansas, Dorothy is directed by the benevolent Witch of the North (Suzy Alden) to follow the yellow brick road to find the Wizard of Oz (Robert Bowen Smith), who, the Witch promises, will help Dorothy return home.

Emily Whitworth as Dorothy is a charismatic presence, capturing the character’s sense of adventure, as well as her genuine curiosity and empathy. While this is not one of Synetic’s wordless productions, Whitworth is one of the few characters with spoken dialogue and she does a nice job establishing rapport with her often wordless companions, especially Jacob Yeh as Toto, who fully embodies the dog’s assertive personality.

… a refreshing transformation of a classic.

This new adaptation is a consistently funny, visually dazzling version of the original story, including characters and scenes likely to be both familiar and unfamiliar to the audience. As she adventures down the yellow brick road, Dorothy finds new friends, including the Scarecrow, played with wonderful enthusiasm by Dallas Tolentino. The pair encounters the heartbroken Tin Man (an emotive Philip Fletcher) and finally the Cowardly Lion (Lee Liebeskind), a wannabe king of the jungle who clutches his tale in fear when harassed by a fly.

Performed at Georgetown University’s Devine Theatre, due to water damage at the company’s home theatre in Crystal City, the production only benefits from the intimate scale. Making use of the entire space, the show features Synetic’s unique blend of movement and dance, showcased in some stunning set pieces. The group’s encounter with a seductive poppy field is an especially impressive interlude thanks to Amanda Kircher’s raw, red lighting and Thomas Sowers’ visceral sound design.

As with other Synetic productions, movement and dance are meaningful, especially in this story that focuses on a journey, personal and geographical, of Dorothy and her friends. During one of their adventures on the way to Oz, the group meets a community of exquisite, but highly fragile, people. Enchanted by their beauty, expressed through controlled dance, Dorothy expresses a wish to take them home to Kansas and “put them on the mantelpiece.” It’s only through dancing with them that she learns how important it is “to move as you please.”

The company’s fantastic production values are on full display in the show. Alison Samantha Johnson outfits the cast in clever costuming, with Dorothy in her recognizable blue gingham. The action on stage is aided by Patti Kalil’s adaptable set and underscored by an atmospheric soundtrack composed by Konstantine Lortkipanidze, featuring a mix of synth beats and instrumentals.

As expected, Dorothy and Co. do eventually arrive at the emerald city to meet the great Wizard, an excellent Robert Bowen Smith. Originally a steampunk-style adventurer, masquerading as Oz the great and powerful (and fraudulent) he sends the group on their final adventure, to vanquish the Wicked Witch of the West (Natalie Cutcher, delightfully over the top).

At last, Dorothy and her friends find a happy conclusion at the end of the yellow brick road. As Dorothy says, “there’s no place like home;” there’s also no evening of theatre quite like this one, with the avant-garde look, sound and feel that Synetic consistently delivers.

“The Wonderful Wizard of Oz” plays through Aug. 12 at the Devine Theatre in the Davis Performing Arts Center at Georgetown University. For tickets or more information, click here.