1. ‘James and the Giant Peach’ by Heritage Players.

Synopsis: Roald Dahl’s fantastical tale of a boy, his insect friends and their amazing journey across the ocean on a giant piece of fruit. Featuring a wickedly tuneful score by the Oscar, Golden Globe and Tony Award winning team of Pasek and Paul (La La Land and Dear Evan Hansen, A Christmas Story, Smash, The Greatest Showman). A curiously quirky musical for the whole family to enjoy. When James is sent by his conniving aunts to chop down their old fruit tree, he discovers a magic potion that results in a tremendous peach… and launches a journey of enormous proportions. Suddenly, James finds himself in the center of the gigantic peach – among human-sized insects with equally oversized personalities – but, after it falls from the tree and rollsinto the ocean, the group faces hunger, sharks and plenty of disagreements. Thanks to James’ quick wit and creative thinking, the residents learn to live and work together as a family. The dangerous voyage is a success, but the adventure takes a whole new twist once they land on the Empire State Building. 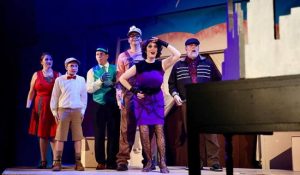 2. ‘On The Town’ at Olney Theatre Center.

“The dancing … is a delicious gift from the heavens.” – Mary Ann Johnson.

Synopsis: Three young sailors on shore-leave hit 1944 New York City in a mad sprint to find love before being shipped off to war. Gabey sets off in search of a beauty he’s only seen on a subway poster — that month’s Miss Turnstiles — while his comrades stumble into romances with a cabbie who sets her own destinations and an anthropologist in search of the perfect “primitive man.” The manic coupling is set to an exuberant Leonard Bernstein score that begins with the classic “New York, New York” and from there reaches heights of classical and popular greatness. Comden & Green’s first Broadway hit grew out of a ballet that Jerome Robbins worked on with Bernstein, so this also promises to be one of the danciest shows of our season! On The Town stars some of DC’s favorite award-winning actors, including Evan Casey, Rhett Guter, Sam Ludwig, Donna Migliaccio, Tracy Lynn Olivera, Bobby Smith and Rachel Zampelli. 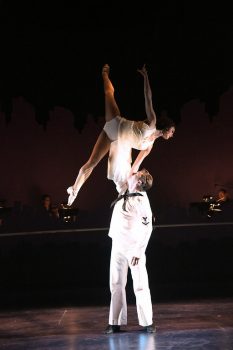 3. ‘Generation Gap’ by The Second City at The Kennedy Center’s Theatre Lab.

“…I’d check out The Second City’s “Generation Gap.” It has something for everyone – literally.” – Kristin Franco.

Synopsis: Chicago comedy institution The Second City will present a new show created for Kennedy Center audiences. From the Greatest Generation to the latest generation, The Second City’s twelve-week summer run of Generation Gap…Or, How Many Millennials Does It Take to Teach a Baby Boomer to Text Generation X? takes you on a satirical crash course spanning miscommunications, careers, dating, and more in this two-act, interactive new spin on the age-old battle of the ages. 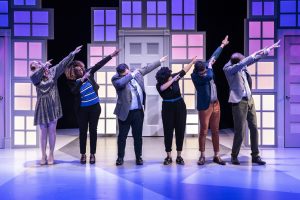 4. ‘Judy and The General’ at Spotlighters Theatre.

“…it’s a swell night out and perfect for a summer evening’s entertainment.” – Timoth David Copney.

Synopsis: Based on The Book of Judith, a deuterocanonical book, included in the Septuagint and the Catholic and Eastern Orthodox Christian Old Testament of the Bible, but excluded from Jewish texts and assigned by Protestants to the Apocrypha. 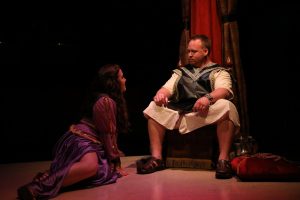 About: At Capital Fringe our focus is on expanding audiences appetites for independent, Fringe theatre, music, art, dance and unclassifiable forms of live performance and visual art.

Capital Fringe is a catalyst for cultural and community development, and a destination that brings artists and audiences together. Capital Fringe thrives on amplifying the vibrancy of the DC’s independent arts community and enriches the lives of those who reside, work and visit here. 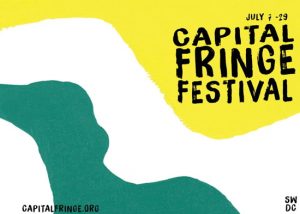