1. ‘Joseph and the Amazing Technicolor Dreamcoat’ by Fredericktowne Players at Frederick Community College.

“In the end, the Fredericktowne Players production is recommended for those new to ‘Joseph and the Amazing Technicolor Dreamcoat,’ but more especially to those who already love the Andrew Lloyd Webber-Tim Rice show, with its retelling of a thrilling biblical narrative and its variety of tunes representing various genres.” – Mark Dreisonstok.

Synopsis: One of the most enduring shows of all time, Joseph and the Amazing Technicolor Dreamcoat is a re-imagining of the Biblical story of Joseph, his father Jacob, eleven brothers and the coat of many colors. Told entirely through song with the help of a main character Narrator, the musical follows preferred son Joseph. After being sold into slavery by his brothers, he ingratiates himself with Egyptian noble Potiphar, but ends up in jail after refusing the amorous advances of Potiphar’s wife. While imprisoned, Joseph discovers his ability to interpret dreams, and he soon finds himself in front of the mighty but troubled, Elvis-inspired, Pharaoh. Joseph’s solution to Egypt’s famine elevates him to Pharaoh’s right-hand man and reunites him with his family. #JoesJacket. 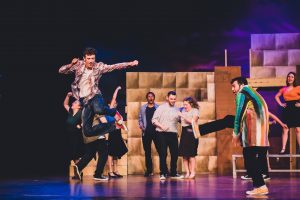 Synopsis: Greetings, salutations. Welcome to Westerberg High, where Veronica Sawyer is just another of the nobodies dreaming of a better day. But when she’s unexpectedly taken under the wings of the three beautiful and impossibly cruel Heathers, her dreams of popularity finally start to come true. Until JD turns up, the mysterious teen rebel who teaches her that it might kill to be a nobody, but it’s murder being a somebody…. 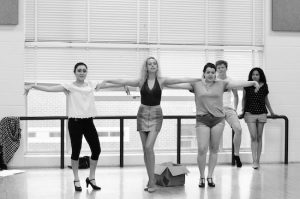 “There are heaps of laughs, lots of high jinks, and tons of talent on display is this spoof of a Gilbert and Sullivan classic.” – Steve Charing.

Synopsis: They’re back! Chicago’s most innovative theatre company, The Hypocrites, returns with an encore engagement of their critically-acclaimed, immersive and family-friendly version of Gilbert and Sullivan’s The Pirates of Penzance. To complete the repertory, they will also be introducing Olney Theatre audiences to their zany take on H.M.S. Pinafore. Enjoy either show from the promenade, where you sit onstage and move around the set as the action dictates. And don’t forget to bring the kids! They can hang out in the ball pit and experience these Gilbert and Sullivan classics in a way they’re sure to love and never forget. 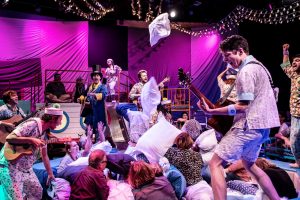 “Altar Boyz’ is a show you may not be sure about at first but you will no doubt feel good after going.” – Jeanie Casison.

Synopsis: Altar Boyz is a foot-stomping, rafter-raising musical comedy about a fictitious Christian boy band on the last night of their national “Raise the Praise” tour. The Boyz are five all-singing, all-dancing heartthrobs from Ohio: Matthew, Mark, Luke, Juan, and Abraham. With tight harmonies and spectacular choreography, the Boyz do their best to spread the word of God through pious pop music, including signature hits such as “Rhythm In Me,” “The Calling,” “Jesus Called Me On My Cell Phone,” and “I Believe”. 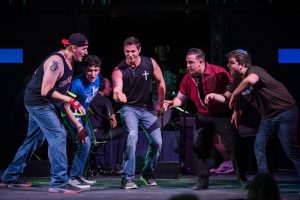 Where: The Patricia and Arthur Modell Performing Arts Center at The Lyric is a great landmark for the Artscape festival site (140 West Mt. Royal Avenue, 21201).

Why: Artscape is held outdoors in tents, and inside the neighborhood’s premier exhibition spaces and performing arts venues. The festival is 100% free and accessible and takes place rain or shine. New for 2018 – Artscape is proud to shine a light on the creative and artistic talent of Baltimore’s youth, with plans to showcase youth-focused programming (in both the visual and performing arts) on Artscape’s opening day – Friday, July 20, 2018.day. For more information, email Artscape.