1. ‘The Wonderful Wizard of Oz’ by Synetic Theater at the Davis Performing Arts Center.

“… a refreshing transformation of a classic.” – Norah Dick.

Synopsis: Synetic Theater presents a brand new adaptation of one of the most important cultural texts of the twentieth century, L. Frank Baum’s American masterpiece The Wonderful Wizard of Oz. Producing Director Paata Tsikurishvili, Director Ryan Sellers and Choreographer Tori Bertocci have created an environmental and spectacular adventure where verbal and nonverbal communication embrace each other in this innovative and heartfelt story of community, perseverance, and magic. Join Dorothy and friends as they embark on their journey down the Yellow Brick Road and see how Synetic brings to life Baum’s characters in a way only Synetic can. This adaptation of Baum’s beloved children and adults most beloved tales is the premiere production in Synetic’s New Voice Series. 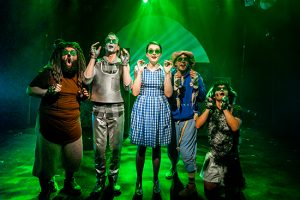 The cast of ‘the Wizard of Oz.’ Photo by Brittany Diliberto.

2. ‘Come Back to the Five and Dime, Jimmy Dean, Jimmy Dean’ at Cockpit in Court.

“This production did not disappoint.  It’s a perfect little glimpse into the lives of some people who will remind lots of us of someone we know.” – Timoth David Copney.

Synopsis: In a small-town dime store in West Texas, the “Disciples of James Dean” gather for their twentieth reunion. Now middle-aged women, they were teenagers when Dean filmed Giant two decades ago in nearby Marfa. One of them, an extra in the film, has a child whom she says was conceived with Dean during the shoot. The ladies’ congenial reminiscences mingle with flashbacks to their youth; then the arrival of a stunning-but-familiar stranger sets off a series of confrontations that smash their delusions and expose bitter disappointments. 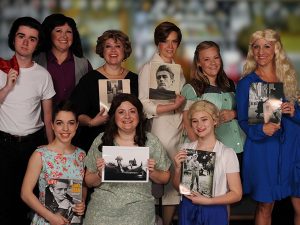 3. ‘Be a Good Little Widow’ by Unexpected Stage Company.

“Bekah Brunstetter has written a play that starts quietly but eventually wraps its arms around you in a comforting hug.” – Mary Ann Johnson.

Synopsis: Life can be messy. Melody thought being a young wife was hard, until she became a widow. As she contemplates the proper way to grieve, her mother-in-law is by her side with never-ending, yet well-meaning, expert advice. From dutiful black dresses to inappropriate outbursts, Melody navigates an unchartered course towards understanding what it means to find someone through losing them. Brunstetter’s quirky comedy contemplates how devotion and hope can persevere in the midst of unexpected loss. 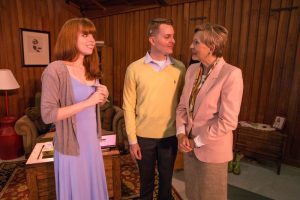 Synopsis: A brilliant play, beautifully fashioned, sometimes wacky and sometimes sad, combines hilarity, poignancy, outrageousness, and tragedy. A songwriter with visions of glory toils by day as a zookeeper and by night sings at piano bars in Queens, New York, where he lives with his wife. Meanwhile, downstairs lives his mistress. Chaos ensues on one day when the Pope makes his first visit to the city; the songwriter’s soldier son Ronny goes AWOL; an old school chum, now a successful Hollywood producer, shows up with his starlet girlfriend in tow; and a group of nuns all descend on the apartment in this enchanting, zany farce. 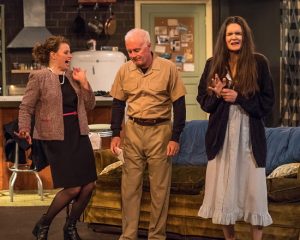 “I left the show feeling profoundly touched by Baker’s bravery in honoring their journey and loss in such a public forum with such honesty.” – Liz Ruth-Brinegar.

Synopsis: Burgeoning on broke and in need of a bathroom break, one teacher pays far more than union dues in this one-educator show about a treacherous trek to tenure status. 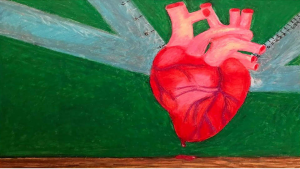 “Burn Out Blessings” by Al Baker at Capital Fringe Festival.