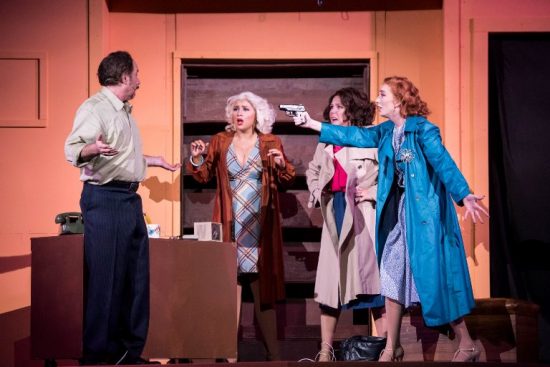 Step into the quaint setting of the Annapolis Summer Garden Theatre for their new show “9 to 5,” and you’re immediately transported back to the 1970s, the timeline for this fun, entertaining, and, yes, sometimes a little risque musical based on the popular movie starring Dolly Parton, Lily Tomlin, and Jane Fonda.

The production begins with a rousing opening of Parton’s popular cover song from the movie, with members of the cast energetically singing and dancing their way through the hustle and bustle of preparing for yet another workday.

…’9 to 5′ was a thoroughly entertaining, female-empowering romp through a time of important social change.

The opening number introduces the audience to the three strong female leads of the show, with Ande Kolp as Violet, the single mom attempting to get her daughter off to school; Sydney Phipps as the loveable Doralee, a happily married and striking woman preparing to endure another day of harassment at the workplace; and the emotional and vulnerable Judy, terrified of beginning a new professional life after her husband leaves her for a much younger woman. This trio establishes a rapport both in character and in song that is apparent right at the beginning of the show and that increases with every scene and musical number.

Phipps’ portrayal of the Dolly Parton’s Doralee is full of charm, and her Southern drawl and lilting vocals are cleverly Parton-esque. Yet she makes this interesting character her own with a commanding stage presence and almost steals the show with her lasso-throwing dream sequence of taking down the evil boss, Mr. Hart, and with the almost heartbreaking “Backwoods Barbie” number about her longing for acceptance by women who underestimate her.

Kolp is a convincing and delightful Violet, ably portraying the efficient yet often comical office manager who yearns to be treated the same way as her male colleagues in a “good o’le boy” professional world. In the second act, her “One of the Boys” number with the dancing ensemble in top hats and canes was possibly the most popular scene of the evening.

Local young actress Lucy Bobbin covered the role of Judy on Saturday evening of opening weekend and served as a vocal powerhouse in her superb portrayal as Fonda’s Judy. Her performance in “Get Out and Stay Out” as the character rejects her husband’s return into her life was emotionally stirring and a perfect vehicle for Bobbin to showcase her emerging talents.

Another standout in the show was Traci Denhardt as Roz, the covert manager who reports the office’s secrets to the boss, Mr. Hart. Her secret feelings of adoration and lust for Hart evolve into a hilarious and arousing suggestive number with humorous choreography and support from the ensemble all dressed as Roz.

In the wake of the #MeToo movement, the story of Hart and his harassing behavior makes audience members noticeably uncomfortable. Steve Castrodad’s portrayal provides an adequate comedic take on the idiocy of that mindset, with just enough grit for the audience to cheer when he appears to be strung up in his bedroom after the trio kidnaps him at the end of first act.

Director Tommy Malek’s talents are superbly displayed throughout the entire production as he also served as choreographer and prop and costume designer. The show is a visual treat, with colorful costumes of geometric patterns that look straight out of a 1979 catalogue. The wigs, in different colors and styles, are an homage to the big hair, more-is-more flashiness of the time period.

Despite some sound issues and a confusing May-December romance for Violet added to the plot line, “9 to 5” was a thoroughly entertaining, female-empowering romp through a time of important social change. Dolly Parton’s lyrics and music, performed with elements of playfulness and drama by the talented show musicians, left, I think, the audience humming, smiling, and pondering how times have changed as they left the venue.