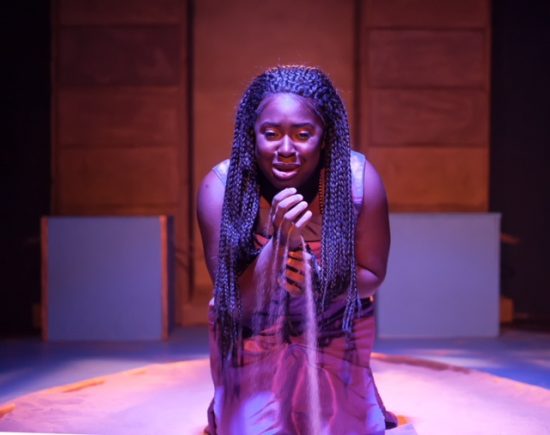 Arts Centric is continuing its trajectory of presenting some of the finest musical theatre to be seen in the city with their latest offering, “Aida,”  now running at Motor House in Station North.  I’m trying to think of something I can criticize just to retain my reviewing chops, but frankly, I got nothin’.  Ok, one teensy little thing does come to mind, but it is a minor flaw. This show rocks from curtain up to curtain call.

“Aida,” music by Elton John and lyrics by Tim Rice and book by  Linda Woolverton, Robert Falls, and David Henry Hwang, is based on the Verdi opera of the same name. It is the tale of Aida, a beautiful princess of Nubia, who has been captured by the Egyptian army, led by the fierce general Ramses.  Ramses is betrothed to Amneris, daughter of the Pharaoh.  So, when he and Aida fall hard for each other, you know it’s not going to end well for anybody.  Operas are always like that, you know?

Arts Centric is committed to presenting excellent productions, primarily by persons of color. This all black version of ‘Aida’ furthers their mission beautifully, and we are all the better for it.

Motor House’s intimate theatre is usually set up like a traditional proscenium theatre.  But for this production, they have put seating on either long side of the rectangular room, with the stage extending between exits on either side.  The entire area is decorated like an Egyptian museum exhibit. The action commences with various cast members meandering about, just as visitors to a museum might.  Prominently displayed on a pedestal is a beautiful Egyptian woman, dressed in the garb of the era when pharaohs and pyramids were the order of the day. Excellent choice to start the show this way, as the audience is immediately immersed into the action.

Director Kevin McAllister has once again proven himself to be one of the most talented directors in the area.  In a show with these many songs and moving parts, it is imperative that the action is kept moving.  A minimalist set distinguished by the addition of a circular sand pit (not sure that was necessary) cut down on the time needed to change scenery – it is a single set but by opening up the room, different areas are used to suggest different locals by the placement of boxes that are moved by the actors. Ryan Haas should be given an award for Best Use of a Small Space for Lots of Actors. Lynn Joslin’s lighting design worked well to illuminate the action and wrapping the lighting tracks on the ceiling with tiny white lights to suggest stars was a nice touch.

Larry Munsey’s costumes were excellent, particularly the headdresses. From the slaves to the Pharaoh and everyone in between, the clothes fit the time period with great success.

Shalyce Hemby burns up the stage with her clever, high-spirited choreography.  It is rare to see the skill level she has on local stages and I look forward to her every move.  Her dancers leap and twirl like dervishes and my only small complaint was that the large cast is so close to the front row of the audience that we were shrinking back to avoid being struck by an elbow or knee.  But it was so good it probably would have been worth it.  That Robe Dance blew me away.

Cedric Lyles does his usual bang-up job of Musical Director and pit pianist.  These voices are glorious, their diction is crisp and rehearsed, the band sounds great and individual voices are allowed to shine when needed and blend perfectly the rest of the time.  All due to Mr. Lyles inspired music direction.

As for the ensemble, while they are all outstanding in their own right, I have to give this one to the male chorus.  As strong as they are as singers (and they were amazing), these boys can dance!   And I’m not talking about the usual daisy-chain, box step too often seen in local productions.  Pirouettes, leaps, barrel rolls, they did it all, especially in the ‘Robe Dance’.  As for the female chorus, they more than hold their own vocally and with the dances as well.

As for the principals and supporting featured actors, I don’t know where to start.  Kristal Anderson in the role of Nehebka has a voice to reckon with.  Curtis McNeil as King Amonasro is majestic and exudes strength even when captured by the Egyptians.  Darien Rothchild makes the most of the smallish role of the Pharoah.

Rafealito Ross really sinks his teeth into the role of the scheming Zoser.  With a strong, true baritone capable of scaling vocal heights that most tenors would envy, he is spot-on in this role, particularly in ‘Like Father Like Son’ and ‘Another Pyramid’.  And Kanysha Williams is just beautiful as Amneris, daughter of the Pharaoh and Radames.  Tall and stately when she stands on a pedestal to sing the opening number, ‘Every Story is A Love Story’, she immediately captivates.  A consummate actress and singer, she is giggly and girly when it’s called for, but when she needs to dig deeper, she is even more impressive.

Ricardo Blagrove as Mereb is a show stealer.  He mugs like a vaudevillian and sings with a voice that is perfectly suited for the part.  If I had to sum him up in a single word, I’d say ‘delightful.’

As for the two leads, I can’t remember when I’ve seen a couple more perfectly matched.  From the smallest gestures to the grandest displays of heart-rending emotions, they are both so equally paired that each brought me close to tears.

Jo’Nathan Michael is simply superb as Radames.  He is commanding, gorgeous, and every inch the general.  I love it when I can see the conflict play on an actor’s face as the character makes difficult decisions.  Mr. Michael is as transparent as cellophane when it comes to his emotions.  We feel what he feels.  Add in his fantastic vocal prowess on songs like ‘Fortune Favors the Brave’ and you have a real star in this guy.

Awa Sal Secka is wearing me out.  As Felicia in “Memphis,” another terrific production by Arts Centric, I think I used every superlative in the Thesaurus in my review about her.  Now I have to come up with even more.  As Aida, Ms. Secka is a knock-out.  Her rich, vibrant voice at times reminds me of Nina Simone, so comfortably does she sit in the lower registers.  And man, can she soar! In song after song, from ‘How I Know You’ to ‘Written In the Stars’ she brings goosebumps. As an actress, she is laser-focused on the character and never wavers.  She is as fine a performer as I have seen on local stages.

Arts Centric is committed to presenting excellent productions, primarily by persons of color. This all black version of “Aida” furthers their mission beautifully, and we are all the better for it.